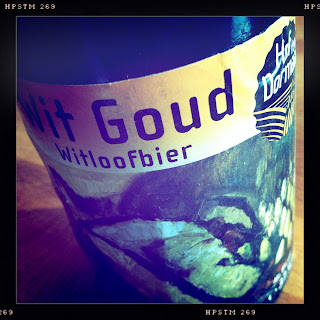 The main reason to think that Wit Goud might be worth it is that Hof ten Dormaal produces some amazing beers. There’s the excellent Hof ten Dormaal Blond and the even better Hof ten Dormaal Donker. I’ve been very impressed in the past, so I thought that maybe, just maybe, this chicory brew might be OK. Plus, I actually like to eat chicory -- the “white gold” of this region -- quite a lot.

Wit Goud pours a rusty orange-brown, and it’s got a kind of a whiskey nose about it. The taste is initially a cooked vegetable sweetness, like caramelised onions, fading into honey. 8%. To me, it’s too sweet and, oddly, it’s not bitter enough. You’d expect a beer made with chicory to be more bitter.

So, another experiment with hop replacement, and all I can say is thank goodness they didn’t take all the hops out. It may be the only thing that saves this beer. Still, if I see Hof ten Dormaal beers on the shelves, I’ll go for the Blond or the Donker.