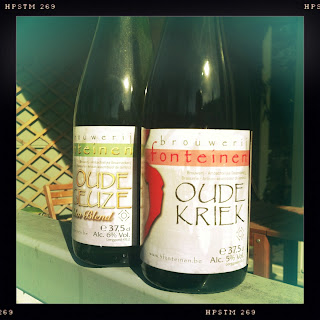 Spring. It finally showed up today. Or we at least finally got our first decent day in Brussels this year.

Everyone here has been moaning about the weather for weeks, and with good reason. It’s been crap on a stick without even the benefit of a stick. It really should not take until the middle of April to get a day where you can spend the afternoon outside.

But enough whinging. It’s time for celebration: at last, we can start opening some of these warm-weather beers we’ve been waiting an age to try.

The first is 3 Fonteinen Oude Gueuze “Golden Blend”, which is an awesomely tart sensation, with a lingering raspiness on the sides of the tongue like thin ribbons of wet sandpaper. Honey, but not at all sweet. Tree bark, but palatable. If this doesn’t quench your thirst on a hot day, then quite simply, you’re not thirsty.

The second, 3 Fonteinen Oude Kriek, pours a rich ruby red, and there’s a hint of musty leaf on the nose. The taste is a bit different from other traditional krieks I’ve had. There’s almost a suggestion of cherry cough syrup here, not in sweetness, of course, as this is as tart as the gueuze. But there’s a striking seam of something that lands like dried black cherries on the aftertaste -- and generally heartier, with a greater depth of flavour than other krieks.

Both are strongly recommended. Let’s hope the warm weather holds so you have an excuse to drink them.