Last beer of a long winter: Black in Japan 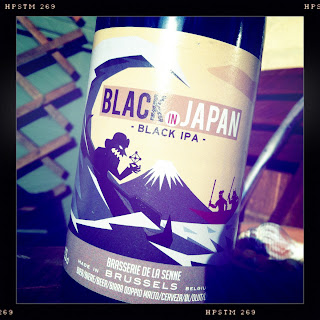 A few months ago, in anticipation of sunnier days, I bought a cellar-load of lambics and other warm-weather beers. By doing so, I somehow jinxed the seasonal shift, and spring has been a long-time coming to Brussels.

There was very little sign of it in March, as we’d hoped, and April hasn’t started well, with snow falling two days out of the first five.

This has all been pretty annoying for a seasonal beer enthusiast like myself, who tends towards the rich dark beers in the colder months and favours the tart thirst-quenchers when it heats up.

To have cases of traditional gueuzes and krieks and whatnot just aching to be opened with the daffodils and tulips, but seeing only a few frightened and frost-bitten buds in the garden... well, it’s heart-breaking.

And knowing it’s all my fault makes it even worse. Yes, I did this. I caused the long winter by buying summer beer too early.

Perhaps you think I’m being too hard on myself. Or perhaps you believe I’m too full of myself, delusionally imagining I alone am responsible for the change of seasons. But consider the following:

Tired of waiting for the sun to return, we decided to accept our fate and headed out into the cold to buy some more wintery beer today. Specifically, we picked up some “Black in Japan”, a black IPA from the ever-awesome Brasserie de la Senne.

It seems to be a one-off brew made in August 2012, which is a shame, because it is incredibly good: sharply hop-tastic bitter with a faint dark sweetness, it does everything a “black IPA” is supposed to do. And you don’t even have to go to the US to find it; Black in Japan is made in Brussels.

More importantly, however, it helped prove that the seasons are dependant on my beer purchases, because as soon as we got it home, the sun came out, and the terrace started to heat up. Buy a winter warmer, and spring appears...