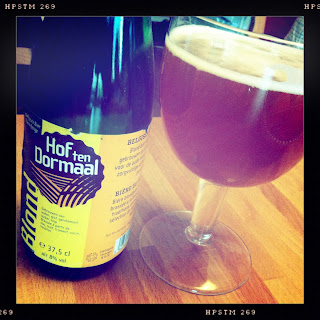 My father-in-law is a keen gardener, but for years he’s been unable to get his wisteria to bloom. I’ve long shared the same frustration: the viney thing in our yard climbs the railings at a furious pace, but it churns out only leaves spring after spring, with not a purple petal in sight.

My wisteria is currently covered in buds, and it looks set to be a fantastic horticultural explosion. Even better, my father-in-law is coming for a visit.

To prepare for the coming gardener’s gloat-fest, I opened a Hof ten Dormaal Blond. I had a feeling it would be good, because its sister beer, Hof ten Dormaal Donker, is excellent.

The blond initially does what you’d expect from a strong Belgian ale, though it is perhaps slightly thinner and less creamy than others. Pine and honey notes then emerge, which create a very moreish character.