A bit of beer 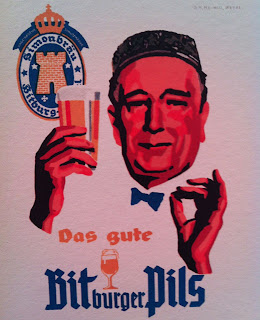 "Abends Bit, Morgens fit" ran one slogan for Bitburger Primium Pils back in the 1950s -- or “Have Bit in the evenings, and you’ll feel fine in the morning". It sounds snappy in German, but snappier still is the advertising line everyone associates with this beer: "Bitte ein Bit". It's simple and easy to remember, and even comprehensible to non-German speakers, unlike, say, Audi’s "Vorsprung durch Technik", which, though famous, is a bit of a murky mouthful.

Not quite as murky as our arrival in Bitburg, however. The Eifel Hills fog was so thick as we pulled in that we couldn't even see the town until we'd arrived in the middle of it. But we had reached our goal: the Bitburger Brewery for a grand tour.

OK, it's not the brewery exactly, but the "Bitburger Marken-Erlebniswelt", which very loosely translates as something like, "The Bitburger Brand Experience-World". The exhibition, spread across about a dozen rooms, explains the history of the label since it's beginnings in 1817 to its dominant position as one of the top-selling beers in Germany today.

First you encounter the raw materials they use: you taste the water and barley, you sniff the hops and you see the microscopic yeast. They then display every aspect of the brewing process with video and simulation machines. They wow you with numbers all the while: over 700 googolplex of bottles produced every year, 54 squijilion kegs filled, etc. It's somewhat overwhelming... 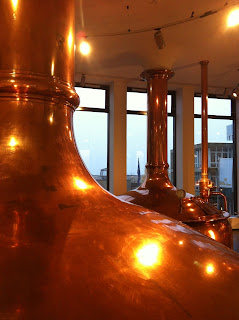 By the time we reached the bar area and the tasting samples, about the only thing I could remember from the extensive set of details in the “Experience-World” was an interesting point about filtration. It seems that they do it differently for beer sold domestically and that made for export. For the former, they figure it only needs to last six months, so two filtration steps are enough. For the latter, however, they want the beer to last twelve months, so they give it a third filtration.

What you get in Germany is a more bitter drink, because all the extra solids they've left in add to the bitterness in particular. What you get outside Germany is less bitter and, in short, has less taste.

Now, why, in this this year of our beer 2012, we can't have supply chains functioning so that a six-month shelf-life is just fine no matter where you are on the globe, I don't know. But whatever: the German Bitburger at least is a tasty enough product. That much is clear.

Yes, I know, I know: I shouldn’t like it. I'm supposed to say, ew it's tasteless, lowest-common denominator, mass-produced muck that no self-respecting beer snob would ever look at, let alone allow to pass his lips.

But I do like it. It's dry, with a very fine carbonation, and it is more bitter than the average pils, I'd say, which is welcome. If you're in Germany, you can hardly avoid trying it, so do so.

And if you’re anywhere near Bitburg, go through the Brand Experience-World. Even if the exhibition overwhelms you, the beer offer that goes with it is well worth it: two glasses in the official bar and three more at selected pubs around town. You won't find a better deal in the Eifel region, I'd imagine.