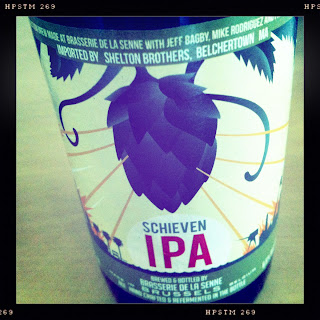 Sometimes, I see a bottle of beer in a shop that I’ve never encountered before, and I think, “oh, maybe I’ll try one of those”. It’s a natural enough reaction for a beer blogger, after all. If it turns out to be delicious, then I’ve found an unexpected joy, and if the new beer ends up tasting like pickled aardvark droppings, well, I figure I’ve only wasted a few coins, so no great loss.

But when I saw Schieven IPA at my local provider’s, I bought a whole case without giving it a second thought.

Though a decision made in haste and relative ignorance, it was nevertheless logical. From the label I saw it was an IPA produced by the fantastic Brasserie de la Senne in Brussels in collaboration with Americans Jeff Bagby, of Bagby Beer and Mike Rodriguez of Lost Abbey. I just knew it was going to be great.

Just to be clear, this is most certainly not one of those new extra-hopped Belgian tripels you see these days, like Duvel Tripel Hop or Chouffe Dobbelen IPA Tripel. Those are fine beers and interesting enough, but Schieven IPA is different: an American-style IPA through and through.

It is not easy to get this sort of thing in Brussels. You either have to schlep around looking for elusive bottles of the single-hop limited editions from Delhaize, or you need to order your IPAs from Britain.

Brasserie de la Senne is on to a great thing here with Schieven IPA. Of course, hop lovers already adore their Taras Boulba, one of my top ten Belgian beers, but Schieven IPA is a true hop-head dream.

The only problem is, it seems to be a limited production beer. Thankfully, I found a second case, but I have been assured that it was the last one available in Belgium. Is this really the end of the line for this outstanding beer? Will there be no more Schieven IPA? Please, say it ain't so...