Most Remote Beers in Britain 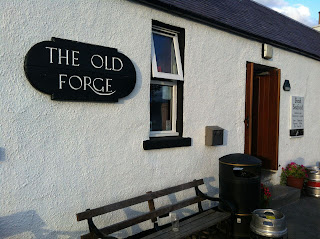 We’ve just returned from long holidays in Scotland and France, and now I’m facing an inevitable backlog of beer reviews from our weeks among the Auld Alliance partners. Not sure why I don’t just write them up at the time... It might have something to do with being on holiday.

Perhaps it’s best to start with the most far out beers of the trip: two we enjoyed at The Old Forge in Knoydart, Scotland, billed as “Mainland Britain’s Remotest Pub”. It is, indeed, somewhat end-of-the-road -- or a bit beyond that, actually, as there are no roads connecting Knoydart to the rest of Britain.

To get there, you take the West Highland Line rail service from Glasgow right to its end at Mallaig, a small port town once a major fishing base but now better known as a passing-through point for tourists on their way via car ferries to the islands beyond, most importantly the Isle of Skye.

But to reach Knoydart, you give those big ships a miss and hop on a small boat to the village of Inverie, population 100 or so. For 20 or 30 minutes you’ll bounce across the waves with a few others huddled together on a couple square metres of sea-splashed deck or in a modest cabin with the captain, whom you’ll no doubt see in the pub a bit later.

“The pub”, of course, is The Old Forge, a spectacular place, as welcoming and comforting as it is remote. 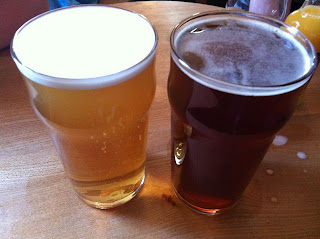 First, the beers. We tried two cask ales there. For starters we had The Standard Ale from Glenfinnan Brewery, which lies just a few stations down the West Highland Line. It’s not called “The Standard”, by the way, because it’s a model to be followed or because there’s some “deluxe ale” you really ought to be drinking instead of this one. The name commemorates the flag Bonnie Prince Charlie planted at Glenfinnan centuries ago, kicking off the Jacobite rising of 1745.

I found it smooth and plummy -- The Standard Ale, that is; not the Jacobite rising -- and altogether delicious.

The second ale we tried at The Old Forge was Whakatu from Everards in Leicestershire: pale with a creamy head and a lemon aftertaste.

But it’s the location that was most impressive and inspiring. The Old Forge is not only the remotest but surely also one of the best pubs in the UK. Beyond the beer and the food, the view of the isolated bay is incredible. Moving really. And the easy atmosphere of the place is very welcome after a long day of hiking around the isolated mountains and rocky shores of the Knoydart Peninsula.

It’s not easy to get to, but it’s definitely worth the trip. 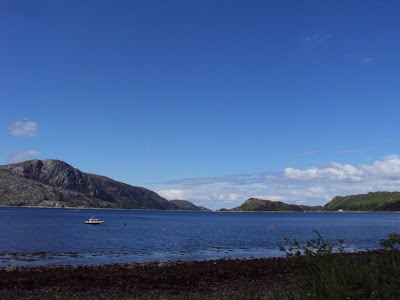