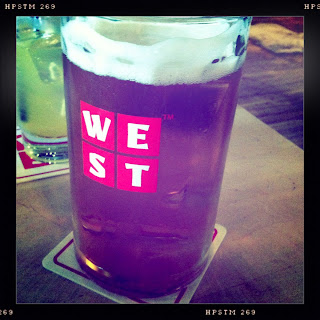 Glasgow holds a lot of family connections for us. It’s Fiona’s mother’s home town, and back in the 90s, Fiona and I spent a year there, while she took a teacher training course, and I did my masters.

Returning there last month was a combination of the familiar -- it rained non-stop for two days -- and the unusual: we found some great beers.

I don’t recall any amazing brews from the time when we lived there. For one thing, we were too poor to afford anything but barrel-scraped bottom-shelf Bulgarian red wine, a Safeway own-brand we would buy when we went to the supermarket at the end of the day to grab the reduced-price cheese and bread about to pass their sell-by date.

As for beer, well, we were probably not that interested in local fare, having spent the previous four years in the Czech Republic, spoiled by its perfect pilsners. Occasionally, some kind prof would take pity on me and buy me a curry and a Tennent’s, a beer that reminds me of yet another family connection: my mother-in-law once worked for Tennent’s. (And before you ask, no, not as one of the “Lager Lovelies” they used to put on their tinnies; it was an admin job, I have been assured.) 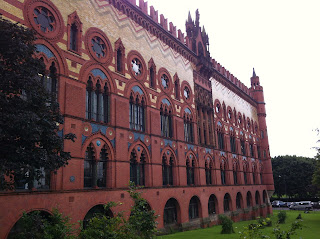 Anyway, what we never experienced in all our days in Glasgow way back when was a proper brew pub like the West Brewery Bar and Restaurant, down on the Glasgow Green near that ever fascinating shrine of social history, the People’s Palace. Everything about West is great: the openness of the layout in a renovated Victorian carpet factory modelled on the Doge’s Palace in Venice, the easy atmosphere of place, its tasty German food and, naturally, the beer.

We sampled two while there. The first was West Summer Lager, which is light and slightly lemony. Fiona was happy to finally have something with some bubbles in it after a few days of nothing but flat British ales. 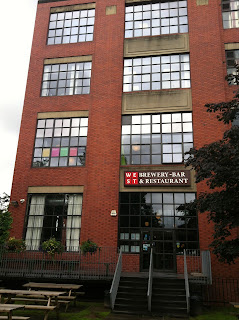 The second was West St Mungo’s, which in addition to a lovely maltiness and a bitter hop finish offers an intriguing hint of lavender.

Fiona and I loved West Brewery Bar and Restaurant hugely. Of course, with a motto like theirs -- “Glaswegian heart, German head.” -- it was bound to please, and even if it wasn’t pouring down outside, we would have stayed for a while. It’s got everything we were missing back in our old Glasgow days. Perhaps if there was something like it there in the 90s we would have remained in Glasgow a while longer as well.