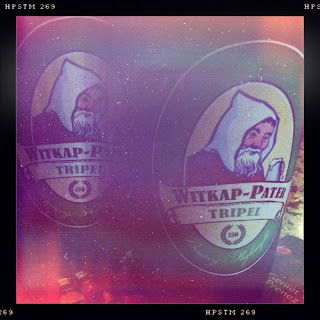 Another Belgian ale we should have tried already, Witkap-Pater Tripel is apparently a bit of a classic. It turned out to be something of a disappointment, however.

Dropping into the inimitable Le Châtelain the other day, we decided to go for it. Fiona said it smelled like orange squash, which seemed a potentially promising start...

The taste, though, was a flash of biscuit that quickly disappeared, then pine and, oddly, menthol, followed by rosemary. Complicated, perhaps, but not something I’d order again.

In short, I wouldn't write a long blog piece about it.