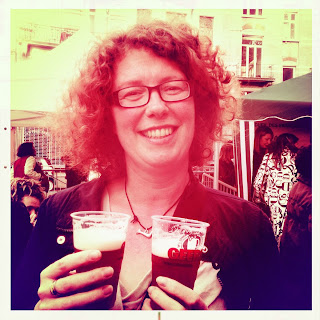 Wandering around the neighbourhood yesterday evening, Fiona and I stumbled upon paradise practically on our doorstep.

At the Parvis de la Trinité, a small square just a few minutes from our place, there was a street party -- a marché gastronomique, in fact -- which we had no idea about beforehand but which turned out to be a great serendipitous find. Sponsored by the Franco-Belgian magazine Juliette & Victor, it was a lovely little public event with a lively atmosphere and lots of tasty treats from France.

But what really made it special for us was the French beer on offer.

We knew it was going to be good as soon as we saw the Moeder Lambic stand. They were serving two beers from the microbrewery Le Paradis in Blainville-sur-l’Eau, France.

The first was La Larme Blanche, a white beer with a notable floral aroma and a surprisingly creamy mouthfeel. Notes of violets made this one something quite special.

But it was the second beer from Le Paradis that really got our attention. La P’tite Sylvie is an American-style IPA with a bang. It’s dry-hopped with Nelson Sauvin, and it reminded us of some of the American IPAs we had last summer, maybe Arrogant Bastard Ale in particular? But comparisons are unnecessary; La P’tite Sylvie is awesome in its own right: citrus, passionfruit, herbs, and neck-snappingly bitter.

Our in-house IPA aficionado (aka Fiona) called it “perfect”, adding “it may be the best beer I’ve ever had”. She concluded with, “so there”.