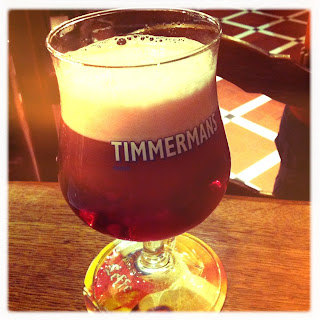 Finding myself downtown with a few minutes to kill today, I wandered into A la Bécasse, a traditional pub half-hidden down a tiny alleyway around the corner from the Bourse. It’s a pretty classic place, and even though it looks like a tour group might barge in at any moment and ruin the atmosphere, it’s still worth taking that chance.

I tried a Timmermans Kriek from the tap. It’s not what I’d call an old-fashioned style brew. The cherry aroma is certainly there, but the taste is more sweet then sour. Perhaps the sweetness doesn’t last quite as long in the mouth as some of the ultra modern krieks, which are more like soda pop than anything else, but still I prefer the sour ones. Give me Kriek De Ranke, Cantillon Kriek or, probably my favourite, Boon Kriek Mariage Parfait 2008, any day.

However, you should give A la Bécasse a try. They’ve got several other lambics and gueuze on tap that are just waiting to be tasted.