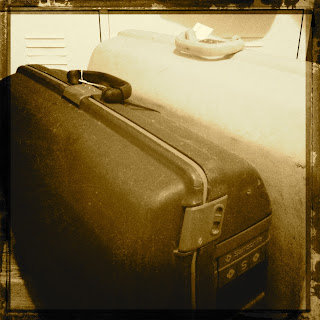 Something that often comes up in my beer-related discussions is the matter of carrying bottles of beer on airplanes. In fact, someone mentioned it again just yesterday, regretting he couldn’t bring bottles of Belgian beer home with him on the flight from Brussels.

It's true that, given the post-9/11 security hoo-ha, you’re not allowed to take bottles in your carry-on baggage. And after the “shoe bomber” and the “underpants bomber”, you're not even allowed to bring it onboard with you in a more intimate location. If you try, you’ll be faced with a bittersweet drink-it-or-lose-it policy at best, and at worst, an all-expenses-paid trip to Cuba where you’ll be fitted for an unfashionable orange jumpsuit and given extremely limited access any to Belgian beer whatsoever.

But you can put those bottles underneath the plane in your checked-in luggage. Really, you can.

Wait, I hear you say, won’t they explode in my suitcase and destroy all my stuff?

It’s really quite simple. Wrap each bottle separately in crumpled newspapers or old clothes -- anything to pad them up a bit. Then, put each one in a plastic bag just in case. Never let glass touch glass. Lay them neatly in a hard-shell suitcase, surrounded by the rest of your clothes and what have you.

They won't blow up or anything: the cargo hold is pressurised just like the passenger cabin. As long as the bottles are well padded and can't jostle around, everything will be fine.

Weight is of course an issue. Bottles of beer aren’t light, so you can’t stuff a hundred of them in your trunk. But you can pack quite a few and still remain within an airline’s baggage weight limit.

One other caution: once you arrive at your destination, let the bottles stand in a quiet place for a couple weeks before opening them. Their contents will need time to settle after being shaken by savage baggage handling machines.

There you go then: problem solved. No, I won’t take legal or financial responsibility for damages incurred by anyone following this advice if it all goes badly wrong for some strange reason. But it’ll be fine, don’t worry.

Email ThisBlogThis!Share to TwitterShare to FacebookShare to Pinterest
Labels: travel