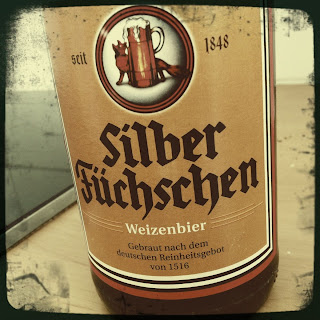 Somehow, someone broke into my brain while I wasn’t paying attention. They rummaged around in there and found all my worst nightmares. Then they took them to Hollywood and made a movie out of them.

That’s the only way I can possibly explain how a flick like “Rock of Ages” gets made. I mean, a movie showcasing the spandex-rock hits of the 1980s and starring Tom Cruise? What has the world done to deserve such cinematographic abuse?

But enough of the big silver screen and on to the little silver fox...

Silber Füchschen is wheat beer from the Füchschen Brewery in Düsseldorf, makers of the excellent Füchschen Alt. It pours a gorgeous golden with a fine carbonation, and the mung on the bottom of the bottle tells you this is a living beer.

The taste is slightly maltier than your standard German wheat beer but not as sweet. It closes with a lovely bitter finish. Overall: refreshing.