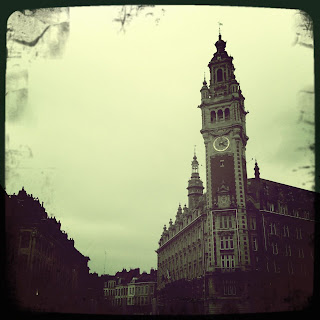 Even moaning expats in Brussels have to agree this city is well connected and can be a great base for exploring this part of Europe. Paris, London, Amsterdam and Cologne are all so close via high-speed rail that you barely have time to drink a beer on the train before you arrive.

Another great destination for a weekend city-break, though one that too often gets overlooked, is Lille in northern France. And for beer-lovers, it’s a mandatory stop. We took another trip there last month and fell in love with the city all over again.

Apart from the culture, architecture, markets, shopping, and free zoo, Lille offers pubs and restaurants with a great variety of beer-related enjoyment. 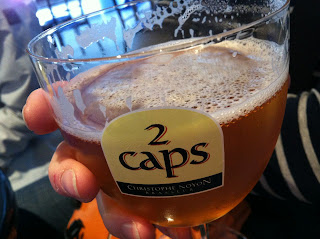 L’Illustration, on Rue Royale, creates a relaxed and inspiring art-café atmosphere where you can order both Belgian and French beers. I’m not sure how they squeeze in music gigs in the evenings given the tiny space, but I’ve been told it’s a great spot for live entertainment.

There’s another place just down from there on Rue Esquermoise that has an amazing international bottled beer selection written up on an enormous chalkboard by the entrance. I wish I had written down the name of it... Modern place, and apparently quite new, because I can’t find it on Google Street View. Readers: please help me find the name! 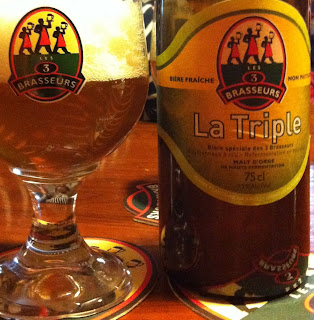 Les 3 Brasseurs by the Gare de Lille-Flandres is one of a chain of brew pubs, and it’s comfortable and friendly, with tasty beers. I think Les 3 Brasseurs La Triple is the best of the bottles, but the tap beers go very well with the food. I tried Les 3 Brasseurs blanche with la choucroute de la mer: cod and salmon with potatoes and sauerkraut. Very yummy.

More incredible, however, was a beer- and speculoos-flavoured carbonnade à l'ancienne at Le Square d’Aramis on Rue Basse. A pot of braised beef in a rich ale-based sauce with a spongy spice cake thrown on top was well worth a momentary departure from my normal pescovegetarian diet. 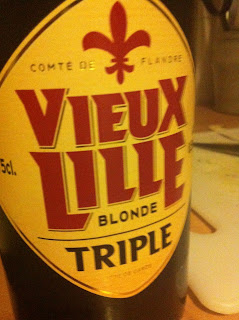 We brought back a few bottles, of course, and we tried a few brands while there. I’ve already written about the wonderful 3 Monts and a number of other great French beers, so here are the new ones:

Pelforth Blonde is a fairly basic lager: drinkable if uninspiring.

2 Caps is a tasty blond with some fruity notes. Refreshing.

Vieux Lille tastes like a tarte tatin, with sticky baked apple dominant. Fiona said she also found coconut, but for me, it’s an apple pie, dropped on your head from a great height.

So, of all the French beers, 3 Monts is still the best, but I’m willing to return to Lille soon to continue testing.