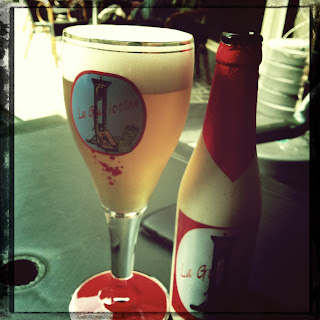 0833: Starting off from Brussels, the train first heads north, which is a bit worrying given that the city of Namur lies to the south. But hey, I’ve got nothing to do and all day to do it, so if I’m on the wrong train and end up in Antwerp, that’s fine.

0855: No, we’re OK. The train swung around to dip under Schumann and Place Lux to pick up any Eurocrats needing to head to Luxembourg. We’ve been 20 minutes on the train, and we’re still not out of Brussels. Tedious.

0902: Two women travelling with a group of older students break the boredom by passing out onion seed rolls to everyone, including me. Yummy.

0956: The train finally arrives in Namur with an 18-minute delay, which is really not that bad considering all the works going on along that particular line.

1000... My first impressions of Namur are good. The old town is very pretty in parts. Sure there’s a bit of post-war architectural abomination, but overall it’s quite beautiful. The streets are bustling and active, shops are open, people are spending money, there’s construction and renovations going on all over... There’s not much sign of the European financial crisis here, nor of Wallonia’s economic troubles, which are often very evident in this part of Belgium. Rich and busy, Namur reminds me of, um, dare I say: Flanders.

1030: I’m liking this place a lot. It’s lively yet compact at the same time. Tidy too. It’s so different from Brussels: people stop for pedestrians at crosswalks, and even more incredibly, they smile at you when you talk with them. It’s like another world. OK, the sun is shining, and everyone’s in a good mood...

1050: I enter the exhibition of the Trésor d’Hugo d’Oignies at 24 rue de Fer (not rue Julie Billiart like my ancient guidebook says). It’s a fantastic collection of medieval religious art from the region: filigrees and reliquaries galore.

Now, I know a lot of folks don’t go for holy bones wrapped in gold, but I am a fan. A big fan. Give me the tibia of Saint Dogbert in a quartz cylinder all surrounded by glittery stuff any day. This group of objects is one of the best I’ve ever seen, right up there with the excellent collection in Aachen.

1200: It’s time to restore one’s force. I sit down at Au Ratin Tot 1616 on the Veg Market. I’m feeling all monastic and Ardennesy, so I order an Orval.

1250: The rain’s not stopping, so I order La Guillotine. No, don't worry: it's a beer. The weather is depressing but not that bad. La Guillotine apparently comes from the Huyghe Brewery (ie, Delirium), so, it's imported from Flanders then.

The appearance is inviting: golden colour topped by a firm puff. The taste is Belgian tripel with an emphasis on lemony notes, almost grilled lemon, as well as fresh grapes, somewhat oddly. Bitter back-bite. Not too bad, but nothing to lose your head over either.

1330: The rain has abated, and I’m off for a lunch of baked potato and melted brie. Just what the stomach ordered.

1450: On train back to Brussels. I’m amazed I’m leaving this town not having tried the local Blanche de Namur, but after asking in 12 or 15 places, no one seems to have it. Only Hoegaarden and Blanche de Bruges. Odd. Does Namur no longer produce its own beer? 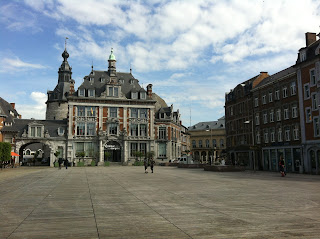