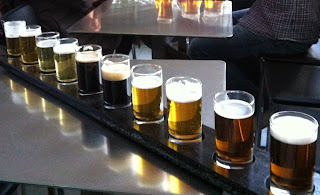 When someone says “brewpub”, what comes to your mind?

I think of straightforward places, designed simply, with an overall theme of a romanticised early industrial or even pre-industrial age. No-nonsense wooden floors and furniture -- preferably benches and long tables -- are essential, as are bits of old brewing equipment scattered around to suggest decades of artisanal continuity amid new stainless steel vats.

In short, to me, a brewpub generally looks more folksy than flash, and the clientele (myself included) more often than not follow suit.

It’s completely the opposite at the super-swanky Brew Bistro in Nairobi, Kenya.

Home of Big Five Breweries Ltd, the bar is a spectacle of glass, chrome and plush designer chairs, and most of the customers are dressed to impress. When I walked in, definitely underdressed, on a Friday evening back in February, it was clear that this is one of the premier spots in Nairobi where the young rich go to be seen.

Yet, this social epicentre is indeed a brewpub. They’ve got a number of good beers, and I tried a few of them (though not as many as I would have liked because I had a flight to Nigeria the next morning). My colleague who brought me there suggested we get a sampler plank of five small beers...

The first was Chuikolsch, a light Kölsch-style ale with minimum bitterness. Light and refreshing.

The second, the pilsner Simpils, would fall into my list of warm-climate lagers, though perhaps a wee bit maltier than others.

Nyatipa is a pale ale and the hoppiest of the lot. I think it was the best of the five, though even more hops would have been welcome.

Fourth up was Kifabock. Billed as a “Belgian style Dubbel bock”, this was the most disappointing glass from the plank. Sticky with malt but with nothing standing up to counter that.

Finally, we tried Temstout, roasted dark with coffee and chocolate flavours, and even something honey about it. Not bad.

Overall, it was a good sampler, but I hope to go back next time I’m in Nairobi and give Brew Bistro a longer sitting. I’d like to try some of their other beers at a more relaxed moment -- that is, not on a hopping Friday night. And I’ll prepare myself beforehand for this upscale, high-brow brewpub.