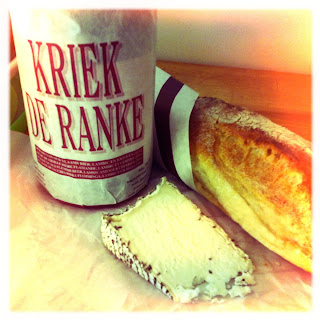 “It would be nicer if the weather were warmer”, says Fiona.

Indeed. We’re inside on a 12C day in the middle of June, dreaming that we’re sitting on the terrace sun-trap on a summer’s day. Or, well, a hot day. Because it is summer technically...

Still, Kriek De Ranke is lovely. The aroma smothers you in amarena ice cream, but the taste is a whack of mouth-watering tartness that somehow evolves into velvet and something else besides.

“It has a musty taste like the smell of a wine cellar”, Fiona adds, “but in a nice way”.

Gorgeous. This is a serious kriek, not the sweet sodapops you sometimes see, and it hits all the right notes. I would highly recommend it.

I think I’ll have to try a comparison tasting of Kriek De Ranke against Cantillon Kriek or even Boon Kriek Mariage Parfait 2008. Kriek De Ranke seems a bit smoother than the former yet somewhat sharper than the latter, but it calls for a side-by-side test.

Like its sister, the gueuze Cuvée De Ranke, Kriek De Ranke also goes very well with cheese. It would almost certainly go well with a sunny day, too, but it looks like it’ll be some time before I’ll be able to confirm that.