Getting Real about Westvleteren 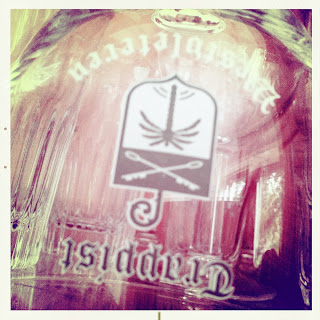 When I was a young boy, we used to play a game called, “kill the guy with the ball”.

The rules, such as they could be defined, were rather straightforward. Someone would pick up the ball and start running, and the rest of the gang would chase him down, drive him into the dirt, and pile on top of him until he couldn’t breathe. There were no boundaries, no safe zones, and no time outs. If you ran into the woods or onto the road and were tackled there, then so be it.

Your pulverisation was inevitable. Even fast runners would tire out eventually and get creamed into the ground by the hunting pack. And dropping the ball in fear would only lead to your getting whoomped twice as hard for being such a wuss.

It must have seemed great fun at the time, because we’d usually play for hours, often until someone had to go home for iodine and bandages, or to the hospital for stitches.

Looking back on it across a span of time too long to mention, I cannot easily understand what ever inspired any of us to pick up the ball in the first place. I mean, other games that have more or less the same rules -- say, rugby -- at least have the marketing sense to change their name to encourage people to take it up. But this was a model of truth-in-advertising: no one could mistake “kill the guy with the ball” for anything else. You knew what was coming.

What pushed us to put ourselves forward for slaughter was, of course, social pressure. The boyhood dare, the challenge of tempting fate, of trying to be the top of the group for even just a few seconds... that was the glory and social credit to which we aspired. It seemed well worth any scrapes and bruises.

Peer pressure can certainly make us do strange things.

It is much the same story for me with Westvleteren beer. OK, maybe a little less violent, but hear me out...

When I first became interested in Belgian ales, everyone told me that Westvleteren was the best. It was hard to find, they said, yet worth the extreme trouble. In fact, the near impossibility of acquiring it gave Westy the aura of a holy grail. The hardship of the quest itself confirmed its excellence.

So, I picked it up, and I ran with it. That was what everyone expected.

Well, now I’m going to drop it. Specifically, I am going to remove it from my list of top ten Belgian beers.

Don’t get me wrong. Westvleteren is an excellent beer, and I'll never turn it down when it's on offer. However, there are two problems with it. First, I’ve found some inconsistency with Westvleteren 8 and 12 over the years: a few batches I’ve had have been overly porty and sour.

But more importantly, I just like other brands more. Even in that style of heavy dark Belgian ales, I prefer St Bernardus Abt 12 or Achel Brune Extra. (The latter is also quite hard to find if that’s what you need to confirm greatness.)

I’ve not dared admit any of this before, but I now find I have the confidence to say what must be said: Westvleteren is not a top ten Belgian beer. I can no longer bow to the social pressure of tradition and the expectations of others who maintain that it is.

If I am grounded into the dirt as a result, so be it.