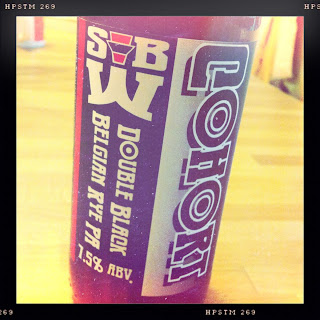 If ever a beer posed a challenge to the idea of recognised styles and brewing traditions, this is it.

Cohort Double Black Belgian Rye PA is a multiplicity of paradoxes. A dark India pale ale produced by the Summer Wine Brewery in Yorkshire, it uses Belgian yeast and New World hops as well as rye. Confused yet?

I’m not sure why the word “double” is in there, but I’m assuming it’s short for “double take”, which is what you’ll do when you try this beer.

It pours dark and dangerous. The aroma is rich and barny in a warm and wonderful way. The taste is black IPA yumminess of bitter pitch, but it also has notes of things like roasted celery and liquorice. Every taste reveals something new: black cherry, birch bark and radicchio all make appearances. It’s a fantastic set of flavours.

Most astoundingly, Fiona likes it, and she never goes for dark beers (though she does love IPAs). It gets weirder still, however, when she says it’s got too much liquorice to it, because usually she adores liquorice. Yet another paradox of this brew...

It may not be for style sticklers and tun-thumping traditionalists, but to my mind, Cohort Double Black Belgian Rye PA is awesome. It’s perhaps slightly more farmyard than Emelisse Black IPA or Brodie’s Dalston Black IPA, but it’s at least as good as either -- and maybe even better given its challenging complexity.