Catching up in French and in beer 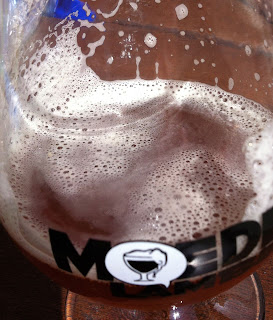 Why does everyone who sits next to me in every bar in Brussels -- no matter how small and out of the way -- speak English? Am I some kind of magnet for Anglophones or what?

No, really: wherever I go, it’s the same. I’ll find an empty little pub far from any known international institution or tourist attraction, and the next person through the door will plunk himself down nearby and start yatting away on his mobile in fluent English. Or a group of Americans or British will come in for an alcohol-fuelled decibel contest. Lovely.

It’s not that I’m against the English language, of course, but it does make it that much harder to learn French here. I’m currently on a professional sabbatical to improve my French, and in addition to the courses I’m taking, it would be nice to be able to go somewhere and immerse myself in a Francophone social atmosphere.

It’s not as easy to do in Brussels as you might think.

And when I am speaking French with people, many will try to switch to English. That’s fine when their English is better than my French, but -- somewhat surprisingly given my niveau du français -- that’s not always the case. Some have told me to just give up and go to France for a while, where it’s easier to avoid Anglophones (except in Paris in summer, of course, when the first language of the city becomes American English).

Still, it’s good to be taking classes to catch up a bit in French. After more than eight years here, I ought to speak it far better than I do, but the last couple months have at least helped with my formal language if not so much the informal speech for social situations.

Another thing I’ve been desperate to catch up on is my beer tasting notes. I’ve finally posted all of the back-logged Beerly Coherent podcasts, but there are still a number of brands I haven’t written up yet for the blog, so here goes... 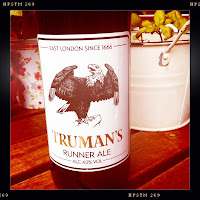 Truman’s Runner Ale pours a lovely caramel-amber with quite a fine puffy and durable head. It has a refreshing yet not overpowering bitterness that reminds me of an Alt, strangely, with the addition of a very gentle whisper of coffee, of all things. Wonderful stuff. I’d love to get a few bottles together for a sessionability test. 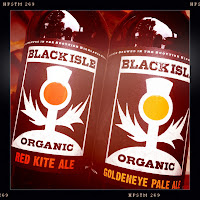 Following on the fantastic Hibernator Oatmeal Stout, we tried two more from Black Isle Organic, but the results were disappointing. Golden Eye Pale Ale has a great floral aroma, but it’s not as crisp and refreshing as it leads you to believe. It’s too sweet, and it’s got a bit of peanutiness that seems out of place. Their Red Kite Ale fared no better with me, I’m afraid, as it was somehow bland and uninspiring. Maybe I was just hoping for the brilliance of their Hibernator, which is simply so astounding that it set unrealistic expectations of anything under a similar label. (And while we’re on the subject, the Black Island labels are beautiful.)

Moving on to Germany, we sampled at some point not too long ago an Unertl Ursud Erinnerungstrunk that Mike brought over. It was a dark wheat beer with a thin mouthfeel and a taste of roasted coffee. Somewhat too sweet but not bad. I’d try it again. 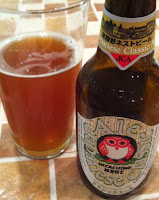 Over to Japan -- do keep up, please -- and we sampled a Hitachino Nest Japanese Classic Ale, which offered up a freaky combination of cedar and tomato flavours. I thought I’d gone mad when I later reviewed my tasting notes, but then I read somewhere that this beer is aged in cedar, so it actually made some sense. Still, it wasn’t quite for me.

Iniquity, from Southern Tier Brewing Company in the US where we tried it many months ago, is described as an Imperial Black Ale. It’s malty sweet with some nice coffee notes, though I found it a bit too thin and flat. I wanted to like it more.

From Italy and the UK -- though we had them at Chez Moeder Lambic -- there was Grunge IPA (Birrificio Indipendente Elav) and Jaipur IPA (Thornbridge), both excellent examples of the genre, with so much going on hop-wise that I fear even trying to explain it. Fiona particularly liked Grunge, which should be taken as a ringing endorsement by her fellow hop-heads. 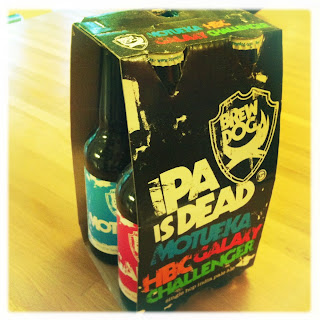 And speaking of IPAs, we also enjoyed the BrewDog IPA Is Dead sampler pack of four bottles designed to demonstrate different hop varieties.

Galaxy was easily the best of the lot. Fiona described its aroma as, “peachy like canned peaches”. Indeed, it has a sharp peach scent about it, and the flavour adds layers of gooseberry and woody rosemary. The mouthfeel is thick, and the astringency of the aftertaste is absolutely wicked. Overall, it’s exactly what you’d expect from the “screw you if you don't like it” crew at BrewDog.

Challenger doesn’t compete in the aroma department but has a welcome pininess in the aftertaste. Motueka seemed to evoke dandelion leaves, maybe roquette. HBC came in with good floral aromas, leading to an herbal taste that was almost mint.

Right. I think that’s me now officially caught up with all the old tasting notes that have been piling up. Time to get back to French now.