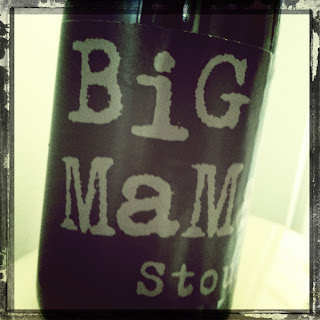 Here’s a bottle that’s been sitting in the “to-try” crate for a little while...

Big Mama Stout emerges from a recipe developed by NovaBirra, though it’s brewed at Jandrain-Jandrenouille, makers of some astounding beers, including the pink-grapefruit-juice loveliness that is V Cense, on my list of top ten Belgian beers for some time.

Burnt caramels, sharp and astringent, play a leading role in Big Mama Stout, as you’d expect. This is certainly not anything resembling a traditional Belgian dark beer.

It is, however, not very tarry, and it’s also relatively thin for a stout, which I always think of as thick and hearty. Also a bit too sweet for me.

Don’t misunderstand me: this is a tasty beer. But I’d consider this something of a gateway stout. It is lighter than a full creosote onslaught like Viven Porter, and thus perhaps somewhat easier for the uninitiated. Being an oakum aficionado myself though, I’d probably go for the Viven.

I would still recommend you try Big Mama Stout yourself. NovaBirra is just about to release another batch, and it would be well worth your effort in trying to procure some.