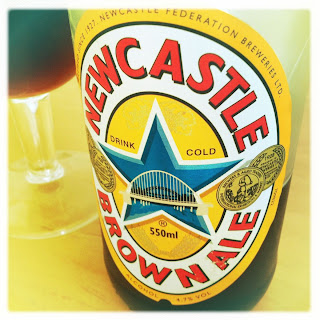 I can't really imagine there is anyone reading these lines who hasn't tried Newcastle Brown Ale, so there seems little use in describing its taste. But a Geordie friend's gift of a bottle, flown direct from the source (Thanks, Christine!), does seem a good opportunity for me to share my one and only Newcastle story.

What follows is a disturbing yarn, and it is perhaps a bit NSFW. Though if you’re following a beer blog at work, then reading this story will not bring you any more trouble than you are already in...

It was back in 1997 or thereabouts, and I was working as an interpreter for the British Army conducting joint exercise with the Czech Army. We eventually got down to Wales for the actual field practice, which included live-fire exercises. I’m relatively familiar with small arms, but helping call in the coordinates for artillery fire was a bit chilling. You really don’t want to confuse the interpretation of those kinds of orders.

Before we got down to Wales, however, the Czech and British soldiers, along with the interpreters had a night out in Newcastle. By that point in my life, I’d thought I’d seen quite a lot of nocturnal social activity already: bars in the Caribbean which you only slowly realise are actually brothels, pub fights in Alaska between fishermen who’d just returned from being out to sea for months, Glasgow on a Saturday evening...

But nothing had prepared me for a night in Newcastle. The young Czech recruits doing their national service were amazed, and I felt I was every bit as much the farm-boy abroad as some of them literally were. They were asking me all sorts of questions, and while occasionally during that job I was often at a loss for the right Czech word, in Newcastle’s bars, I didn’t even have English words for what I was seeing.

The Czech guys turned out to be, um, let’s say “popular” with a number of Geordie women. “Is this normal in Britain?” they asked, this being their first visit to the country. “Things are a bit tamer elsewhere”, I said, “like in sleepy London”. Nothing these soldiers had learned in their military training could help them fend off this kind of assault.

Towards the end of the evening, we had to pull away most of the Czech guys from the remora infestation that had set in. But as we got on the bus, a pack of at least 20 women who had followed them out started flashing the bus. Then they walked alongside the traffic-bound bus, continuing to demonstrate their wares to the hapless Czech soldiers who were all about to head out the next morning to a soaking-wet, sheepshit-covered, Welsh hillside for several weeks. I had to dig around in the back of my brain for the Czech words for “desertion” and “court martial”.

It was Newcastle Brown Ale that powered that jarringly unforgettable evening, and I can’t take a sip of the thin, slightly sweet and nutty nectar without recalling that experience.