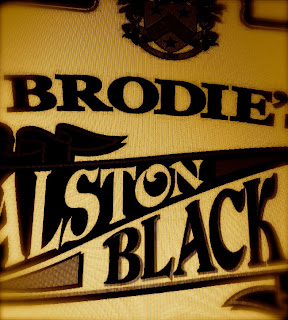 "It doesn't make sense", she said.

"Oh that. Well, yes, we've been through this before: of course it doesn't make sense, but it's awesome anyway."

"Have you tried it?"

"You barely tried it."

"If I tried more, I still wouldn't like it."

"...especially ones pretending to be IPAs."

"Then you should be glad I don't like it. More for you."

She's got a point there. But then so do I: Brodie’s Dalston Black IPA is a wonderful brew. I don't really care that the classification "black IPA" doesn't make sense. What matters is the taste: sharply bitter, resiny and rich, caramelised citrus peel, heady florals, tropical punch and pitch... There is nothing shy about this beer: it demands your attention from popped top to last sudsy sip.

And as far as the style goes, absurd or not, it's fast becoming a favourite of mine. I tried a few other black IPAs in the US a few months ago and loved them all. (write-ups coming at some point)

Of course, here in Brussels, IPAs black or otherwise are not easy to come by. I do have a good connection for the UK ones though: Bob over at Deliciously Different manages to get hold of them as well as many other very tasty British ales. Bob’s told me that Brodie’s has apparently decided to move from large (pint?) bottles to 330ml bottles, which is a bit of a shame if you ask me, but really, as long as the black IPA inside stays the same, I'll be ordering more.

And I’ll also pick up a few regular IPAs for the traditionalists...