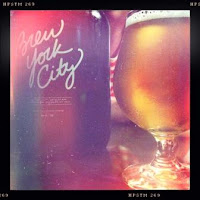 One thing that struck me on my recent excursion into the land of American beer is the ubiquity of the growler. The refillable glass jars, which people take to shops and bars for quality craft beer to consume at home, remind me of the Czech tradition of the džbánek, which though usually made of ceramic, is the Bohemian cultural equivalent in functional terms. Anyway, in the US, growlers seem to be everywhere you look.

Or at least everywhere I look.

In the Williamsburg neighbourhood of Brooklyn, New York, for example, they have become so popular that an outlet of a major drugstore chain is now acting as a beer refueling station. The Duane Reade apparently took the move to overcome anticipated area resistance to a big chain moving into the community, and it looks like it’s worked. They seem to have won over the locals.

Or at least the locals I know.

Wanting to familiarise Fiona and me with local customs as smoothly as possible, Bob and Nona got out their growlers, and we headed for the drugstore. Several times, in fact, during the week we stayed with them. Here are five we tried... 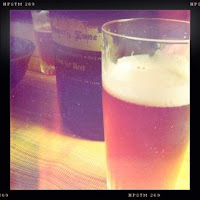 Captain Lawrence Fresh Chester Pale Ale comes from Pleasantville, NY, so it’s hard not to like for that reason alone. But even without its cheery origins, the taste is fine, though different people discovered different flavours. Bob spotted grassiness and an asparagus note over the base maltiness, Nona found maple syrup and walnut, and Fiona caught a whiff of smokiness. I was hit by a biscuity aftertaste.

Sixpoint Righteous Rye is well hopped, creamy and drinkable. Nona described a celery note, while I found candy, and Fiona, a bready aroma. In any case, it all ends up in a lasting bitterness. Bob, not bitter himself at all, was very impressed with this one.

Kelso Pilsner comes from a Brooklyn-based brand. The aroma is herby. Nona found it very refreshing, with fine carbonation. Agreement all round. It’s deeper and more complex than your typical bulk lager, with a touch of caramel and even a celery note. But yes, refreshing.

Our final stop on the growler-go-round was Shock Top Belgian White. Nona said it held the glass well, but none of us were too sure what that meant. She may have said “he”, referring to the aforementioned unbitter Bob, who was, in fact, embracing his snifter with noteworthy refinement. Regardless, the beer in the glass had that typical witbier creaminess, with an aroma of coriander and serious lemon notes.

In all, we came to the conclusion that Duane Reade in Williamsburg surely sells the best beer of any drugstore anywhere.

Or at least of the drugstores we know.