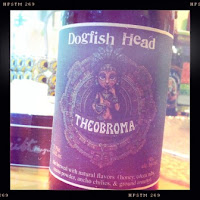 I like to try “historic beers” when I can -- that is, beers made to very old recipes that attempt to recreate the flavours of bygone days. They’re always very weird, and none of them are ever going to become regular tipples for me. But still, they are fascinating.

Those I’ve had before, including Gageleer and Dupont Cervesia, are recreations of the pre-hop era of brewing in Europe’s Middle Ages. If nothing else, those beers show you why hops supplanted bog myrtle and other herbs in brewing.

The following two beers, however, trace their roots back much further: with recipes originating in BCE times.

It pours an orangey amber (presumably from the annatto?), and the aroma is very clearly cocoa. We didn’t pick up any chillies in the taste, but Brian, Fiona and I all thought it exhibited both M&Ms and Skittles-style fruit flavours. Fiona found it “sour and thin” over all, and I’d agree.

Dogfish Head Midas Touch was the second historic beer we tried in the States on this last trip. The brewer says the recipe “is the actual oldest-known fermented beverage in the world”. It comes from a region now in Turkey and is 2700 years old. Wow.

We got a quick taste of Midas Touch at a beer festival in Connecticut (more on that later). The first thing we noted was a grape sweetness, and overall, I’d describe it as a bit musty, though drinkable.

I didn’t find either of these beers “a keeper”, but I did like trying them. Sometimes “interesting” is more important than “delicious”.