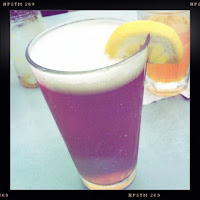 Step by step, I am slowly clearing the back log of tasting notes from our holiday in the US. It would seem we sampled 61 different brands in the three weeks we were there, which I think you’ll agree is a pretty good innings.

To that tally, let me add three more.

We tried Ommegang Pale Ale from a growler one evening in Brooklyn, and sadly, we were a bit disappointed. We’d expected the citrus notes others have raved about, but didn’t find them. Any flavour disappeared quickly, and it came across as not very distinctive at all. I won’t give up on this one, however, as I’ve heard very great things about this beer. I’m going to buy a bottle on my next trip to the States to give it another chance. 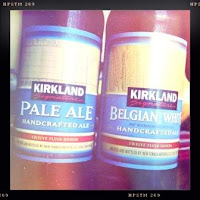 Also unexpected, but from a different direction, was Kirkland Signature Pale Ale, a beer from the "we only sell mayonnaise in 55-gallon drums" wholesaler Costco, but brewed by Matt Brewing Company in Utica, New York. Though you might not expect much from a big chain store’s “own brand” budget beer, this one is actually pretty good, as is its sister brew, Kirkland Signature IPA.

The pale ale pours copper, with healthily active carbonation building into a lasting head. The aroma is nothing much, it seems, but the taste is hoppy and refreshingly bitter. Not bad at all.

Captain Lawrence Liquid Gold, however, was my favourite of the three. Billed as a “Belgian pale ale”, it had a wonderfully creamy smooth mouthfeel with a light bitterness kicking in later. Citrus notes round it all off -- even without the unnecessary addition of a lemon wedge the bar sought fit to jam onto the edge of my glass -- making this a very pleasant and drinkable beer.