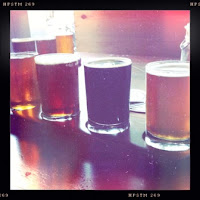 One evening during our stay in the Brooklyn, New York, neighbourhood of Williamsburg, we went out to pick up a growler at the drugstore, but somehow got distracted at Breuckelen Beer Merchants around the corner.

Distracted, that is, by a flight of four beers.

One was Empire IPA, which I’ve already discussed, and two Brooklyn Brewery beers I’ll write about later. The fourth was Elysian Saison Poivre, which turned out to be one of the best beers I had on our US trip.

Elysian Saison Poivre is not much aroma, but the complexity of its flavour more than makes up for that. “Poivre” means pepper, and although peppery notes are not unusual for a saison beer, this one has it in bags. It overflows with a gorgeous spiciness. Then there’s something in the mid- to late taste that’s like maple syrup. The evolution of the flavours in your mouth is thus quite remarkable.

It’s produced by the Elysian Brewing Company, which, interestingly, got its start in Seattle’s Capitol Hill district, where I used to live back in 1990-91. Elysian opened in 1994, so I just missed it, sadly.

Had beer like this been around a few yeas earlier, I might have stayed in the States... How different my whole personal history could have been...