Not your old American lager 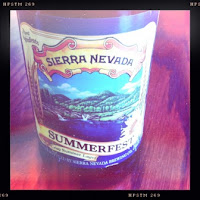 Not long ago, “American lager” meant a pale, thin, fizzy, soda-like substance. Compared to its Bavarian or Czech ancestors, the US brews seemed watered down, diluted to nearly homeopathic “no active ingredient” levels.

Then, in my personal timeline anyway, came Samuel Adams Boston Lager, offering richer flavours: deeper maltiness and an unashamedly bitter finish. Over the years, it has deservedly become a classic of the quality beer scene in the States -- so popular, in fact, and produced in such quantity, that some apparently started to wonder if it could still be called a “craft beer”. In any case, Boston Lager surely deserves the moniker, “gateway craft beer”, because for many people, this is the first step on a life-long love affair with quality brews.

But now, all sorts of things seem to be going on with “American lager”, and there’s a range of flavours within, from the solid, simple and traditional, to the wild and weird. Here’s a few we tried this summer.

Blue Point Toasted Lager is on the more straightforward side of things, with a light bitterness and a gentle caramel. Bob caught a hint of candy sugar, and we were both sensing some berry notes. Tasty.

Sierra Nevada Summerfest is billed as a “crisp summer lager”, and that’s a fair call. The colour is a deep yellowy gold, and it seems to have a hearty body, while not being at all syrupy. A pleasant, lasting bitterness develops mid-way, leading to a dry finish. It is indeed crisp and very appropriate on a hot summer day after a few hours at the pool. This may not be anything outrageous, but it is really quite good. 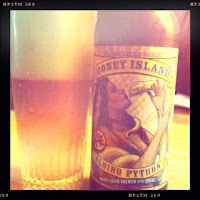 The craziness comes with Coney Island Albino Python, described as a “white lager brewed with spices”. I’ve no idea what a white lager is, but presumably Schmaltz Brewing, makers of He’brew, know what they’re doing...

This one starts off with a fruity nose, and at first taste, we are all sensing the spices... liquorice, at first, and then, oddly, ginger, and also fennel. Fiona says it reminds her of Old English Spangles, a bygone candy, but she’s not sure if it’s the liquorice one or the cough candy one she’s remembering... Naturally, a debate breaks out over exactly what cough candy is. Or was. Herbal cough drops of some sort?

Anyway, Coney Island Albino Python should be tried to be believed. You may not like it, but it will certainly make an interesting change from the American lager you thought you knew.