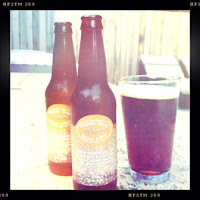 On our summer trip to the US, we tried loads of beers from Delaware-based brewer Dogfish Head, one of the drivers of America’s great craft beer renaissance. There were super-hop IPAs like Dogfish Head Squall IPA and Dogfish Head 60-minute IPA; stranger offerings, like the historic beers, Theobroma and Midas Touch; and, of course, the astounding Bitches Brew.

But that was not all. Oh no.

We also tested Dogfish Head Raison D’ Être, which pours chestnut brown and has an aroma similar to Belgium’s Palm Royale. The flavour is not a million miles away from it either, though less sweet. Bob found a note of dark raisins, though the label says green raisins, while I was thinking it was more like blueberries. Bob also thought he detected an aftertaste of asparagus. The alcohol (8%) seems a bit too strong, that is burning and out of balance. 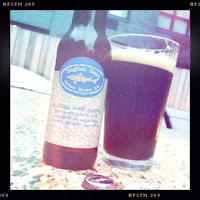 Much better was Dogfish Head Indian Brown Ale. Already a favourite of Bob’s, it’s not brown so much as black and dark. The aroma first hits you with an old fruitbowl air, and the flavour darts back and forth between an IPA and a stout. There’s a definite pumpkin note in the middle -- nothing subtle about it: it’s like sticking your head into a carved jack-o-lantern. And then there’s a whiff of maple syrup. Very interesting. Very good.

Dogfish Head 90 Minute Imperial IPA does not seem to do much on aroma, but it whacks you around the head and shoulders with the flavour of strawberries. The aftertaste is lingering, with something like a Sharpie pen hit of gorgeous, lasting hops.