An evening at the Brooklyn Brewery 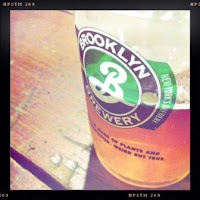 Our beer tour of Brooklyn could, of course, never be complete without a visit to the Brooklyn Brewery, one of the powerhouses of today’s quality beer renaissance in the US. So, Bob took us there for one of their Friday evening openings.

The bar area of the brewery is a lovely space, but the noise is incredible. There’s something about the acoustics in the place -- with hard-surface walls all around and nothing to break up the sound of people trying to talk with each other, everyone just shouts louder to their friends standing next to them, creating an upward spiral of deafening din. It was like normal crowded bar noise times ten.

Now, before you think this is just some old fart moaning about loud young people, let me tell you that my observation was independently verified. I took out my phone and opened an app to give me a noise reading. It said 95 decibels, which is apparently the “level at which sustained exposure may result in hearing loss”. No kidding. It was loud. 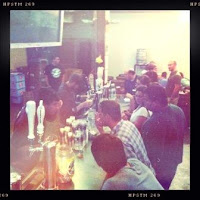 All Fiona and I knew of Brooklyn’s products before was Brooklyn East India Pale Ale, which Fiona in particular loved, and we were keen to try some new ones. Almost every one of them was lovely -- with one notable exception. We’ll get to that in a bit...

Brooklyner Weisse is a tasty wheat beer: very florally and moreish, though perhaps a bit flatter than I would have expected.

Brooklyn Blast Pale Ale is a double IPA with a very strong fruity hop aroma. The flavour is lightly grilled mango. Bob said it was fiery. At least, I think that’s what he said. As I mentioned, it was loud in there...

Brooklyn Brown Ale offers a fine, lasting maltiness. It’s not outrageous on the bitter side at all. Wonderfully sessionable.

Another beer we tried at the brewery was The Brooklyn Concoction. This one didn’t go down well at all. 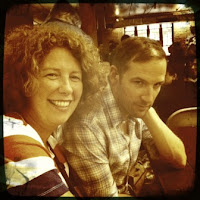 Bob and I had actually tried Concoction a few days before as part of a flight of tasters, and it was so foul, we thought there may be something wrong with the line from the keg. It smelt and tasted more like disinfectant than anything else.

Keeping an open mind, we gave it another shot at the brewery, but the result was the same: Dettol or Pine-Sol dominating the flavour. That’s obviously what it’s supposed to taste like. Bob and I figured it must be some experiment gone terribly wrong. Far from being an “herbal spice beer” as billed, it would be better labelled as floor cleaner.

But in general, we had a great evening at the Brooklyn Brewery. Most of their beers are fantastic, and I would heartily recommend them. When we go back again, we’ll just have to remember to bring ear plugs and avoid sipping from the mop bucket, and it will be perfect.