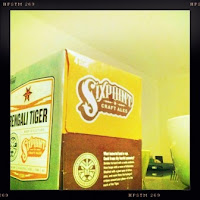 As anyone who’s ever read this blog before understands, I don’t really know a whole lot about beer. Even after sampling many hundreds of different brands, I still find myself struggling desperately in my amateur efforts to describe them.

Still, my deep ignorance hasn’t stopped me from becoming something of a beer snob. Indeed, it has probably accelerated the process.

Take my attitude toward beer in cans, for example. Despite my family connections to the home of such modern conveniences, I have always seen canned beer as a down-market, overly fizzy and taste-damaged product. I swore I could detect the metallic element to the taste. Even when I probably couldn’t.

You wouldn’t catch me with a can in my hand, no sir.

I was forced to reverse this prejudice a few weeks ago, however, when I tried Sixpoint Bengali Tiger IPA. It comes from a can, but there is nothing tinny about this one at all.

In fact, it’s a very fine IPA, with a lively floral aroma and pine notes in the flavour. It’s not too carbonated either. Super yum.

Despite being from a can.