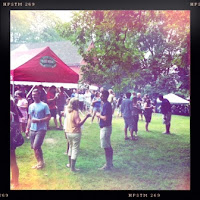 No one will believe this, but by complete coincidence there was a beer festival in Madison, Connecticut, the very weekend I happened to be in town. I wasn’t looking for it. Honest.

I was visiting my brother around the corner, and we popped into the Madison Wine Exchange, where MWE’s Ted Satinsky spotted us poking around the beer shelves and struck up a conversation. He told us of the upcoming charity event, “From Hops to Hope”, and so, two days later, on 24 July, we went down to check it out.

It was a great afternoon out, with dozens of craft brewers, US and international, pouring their goods. Brian and I managed to try quite a number of new beers. One of these, Dogfish Head Midas Touch, I’ve already written about, so on to the others... 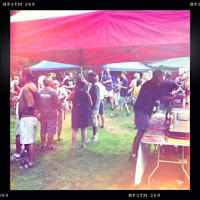 Brew Dog 5am Saint is an amber ale, but it’s not like any amber I’ve ever tasted. It has an overwhelming floral aroma and a super pine hop flavour.

Narragansett Summer Ale is, I believe, the first Rhode Island beer I’ve ever tried. I found it a bit dull and unremarkable, sadly. 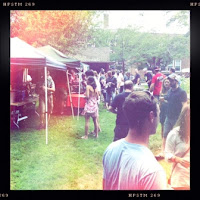 Adding another US state to my beer list -- this time Hawaii -- Kona Fire Rock Pale Ale was a very nice beer, with fine carbonation and a hint of cinnamon.

Kinda Blue, from Boulder Beer, is made with blueberries, which seem to be the fruit of the moment in the US craft beer world as far as I can tell. It is a rather sweet wheat ale, and the blueberry flavour is unmistakable. Not bad. 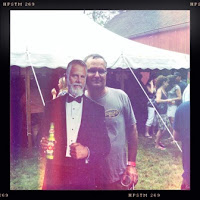 Weyerbacher Hops Infusion is a super-hop lovely, as was Blue Point Hoptical Illusion, which, at 60 IBU caused Brian to note, “if they served this as medicine, you wouldn’t want to take it”. I liked it a lot, as did Fiona, lover of all things hoppy, and we went for a growler of it a few days later in Brooklyn.

Widmer Brothers Nelson Imperial IPA was yet another American hopster beer. This one was smooth, with a splendid maltiness backing notes of pepper and mango. 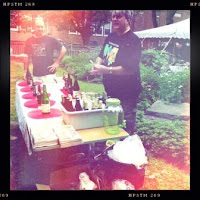 Finally, I spent some time at the Samuel Adams table, where they’d set out a taste test to determine public preferences for an upcoming new beer release. I tried, and liked, a porter with hints of maple syrup in the flavour. No idea what it was or if we’ll see in it mass production soon. Then, I had a Samuel Adams Summer Ale, a lemony wheat beer, which I think it’s fair to say is, um, fair.

Altogether, that was a pretty good day out, particularly considering we’d stumbled across it by chance. Really, we did.