Beer in the Garden State 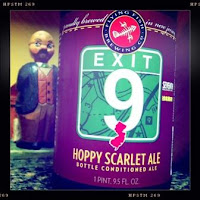 Today, we’re again looking at some American beers, and readers, be advised that there are more on the way. This might seem strange for a predominantly Belgian beer blog. But hey, I’m also now a member of the British Guild of Beer Writers. As Walt Whitman wrote, “Do I contradict myself? Very well, then I contradict myself, I am large. I contain multitudes.”

Whitman’s final resting place, by the way, is in New Jersey, the source of today’s beers.

Times have, of course, changed since I lived in the US twenty years ago. It used to be that if you told anyone you were from New Jersey, the standard response was, “what exit?” Indeed, the “Garden State” was often known more for its highways than its green areas.

There was even a kind of attempt to develop this reputation in a virtuous direction, with service areas on the NJ Turnpike, for example, named after such New Jersey luminaries as Woodrow Wilson, Thomas Edison and, yes, Walt Whitman.

Now, however, when I mention the state of my birth, people seem to think first of The Sopranos. Not sure that’s an improvement. There’s no service area named after Tony Soprano. Yet.

In beer terms, New Jersey is perhaps best known as the historical home of the first canned beer, made in Newark at the Kreuger brewery, where an uncle of mine used to work. Today, however, there are a number of smaller brewers in the state joining the tide of great craft beer that is washing over all the land. I tried two from Flying Fish Brewing, which is based in Cherry Hill, New Jersey, also home to the Walt Whitman service area of the Turnpike.

Keeping with the motorway theme, Flying Fish Exit 9 (Hoppy Scarlet Ale) is super hop fun, with strong passion fruit and mango notes on a solid malt base. It’s it extremely excellent for an exit beer. Hop-lover Fiona is very impressed. 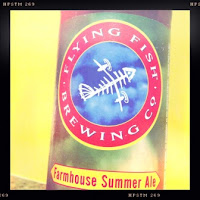 Flying Fish Farmhouse Summer Ale is an easy seasonal session beer. It starts on fizz, then moves to bitter and a lovely ale hollowness of malt in the middle, which finally evolves into a crisp dry finish. It’s refreshing and lovely: very drinkable.

I am always amazed how much beer culture has changed in the US since I last lived there. Twenty years ago, finding bottles of beer this good would have been next to impossible. Now it seems high-quality craft beers are in every liquor store. 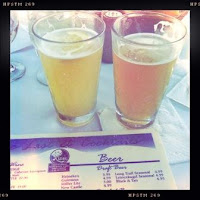 Draft options in restaurants and bars are equally astounding. We went to a great place for dinner one night, Klein’s in Belmar, New Jersey, which has great fish dishes and beers to match. We tried two.

Long Trail Belgian White is faithful to the style, though an interesting sourness kicks in later. This Vermont beer is excellent with seafood.

Leinenkugel’s Summer Shandy from Wisconsin is very lemony, otherwise witbier-ish. It’s refreshing, for sure, although maybe a bit too sweet. Fiona says it would be better in the heat of the afternoon right off the Jersey beach, rather than at sunset on Belmar's Shark River.

By the way, Walt Whitman was chosen as one of the poets for Shark Week: “Where the fin of the shark cuts like a black chip out of the water...”