Tyttebær: what kind of fruit are you? 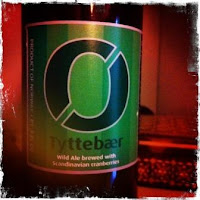 Tonight’s beer is a Scandinavian treat. I’ve already mentioned a number of Norway’s mortgage-wrecking beers, but Tyttebær is something new.

The label proclaims it to be a, “wild ale brewed with Scandinavian cranberries”, though it goes on to explain that a tyttebær is also called a lingonberry or mountain cranberry. Some apparently call it a cowberry.

If, like me, you are still not really sure what the hell fruit this beer is all about, Wikipedia can help.

Produced by Mikkeller at the Nøgne Ø brewery using wild fermentation, Tyttebær pours a reddish-brown, and the aroma and flavour are indeed pretty wild. Somewhere at the core of it, Tyttebær almost seems like Orval, but layered on top of that base flavour is... urinal puck... drifting off into red currents... or raw cranberries... or lingonberries, I suppose... and then some tannin takes over. In the end, the overall tartness means it finishes very clear.

It is, um, interesting, to say the least. Fiona gave up and ran away screaming, “it smells like wee, it smells like wee”. Sure, and while I’m not about to make this my daily tipple either, there is something in the astringency of Tyttebær that I find quite compelling.