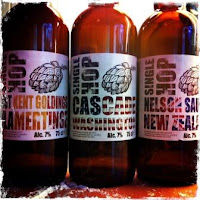 My wife is incredible. How she always manages to find astounding new beers in Brussels shops and supermarkets is just beyond me.

Of course, she would say it has something to do with her willingness to actually go into shops and supermarkets. In fact, standing behind me, she just did say that.

Still, it has to be more than that. Sure, I hate shopping, and I’d probably starve -- or eat out a lot more -- if it weren’t for her practical acceptance of consumer culture, which tends to overwhelm me. But even taking all that into account, Fiona just has a nose for good beer. Really, that must be the reason. Not that I’m lazy or anything.

In any case, she spotted something quite amazing in a Delhaize supermarket the other day: three “Limited Edition Single Hop” beers. Packaged in 750ml bottles with sharp labeling and accompanying literature, this is supermarket beer at its most upscale.

There are three different types, each centred around a specific hop variety: East Kent Goldings grown here in Belgium, Cascade from Washington state in the USA, and Nelson Sauvin from New Zealand. It’s a great concept, offering these three together, though it really is a limited edition: they only made 4000 bottles of each

The retail giant offers some explanation of the new beers, launched only two weeks ago, in a French-language press release. While noting growing public interest in local beers and Delhaize’s support for local brewers, the text doesn’t say who actually brews them, unfortunately. However, it does promise more limited edition beers in future.

If this is the nature of supermarket beer to come, then Belgium is about to experience a step change in taste. They might be slightly pricey at €3.75 a bottle, but these beers are seriously yummy in a very un-Belgian sort of way. 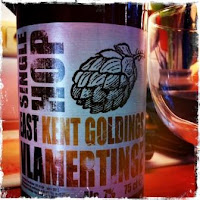 Delhaize Limited Edition Single Hop East Kent Goldings Vlamertinge pours a luminous orange. In mouthfeel, it’s not too fizzy, and it’s something very different from a Belgian tripel. Actually, there’s really nothing of the triple in this tipple -- no buttery mouthfeel like Chouffe Dobbelen IPA Tripel, for example, making it markedly un-Belgian. Very solid hop florals kick in: this is verging into real IPA territory, bitter from the start, then florals and fruits flood in, almost heading into passionfruit zone, but not quite. Maybe the taste gives up just a bit too early and could do with a slightly longer aftertaste, but that’s being extremely picky. This is excellent stuff. 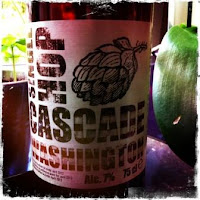 Delhaize Limited Edition Single Hop Cascade Washington is similar, as you’d expect. It pours orange, but it’s slightly less bitter. I get a sense of more citrus in this one than in the first. The aroma is also a bit less intense. Still, this is a gorgeously crisp and refreshing beer. It is just as outstanding as the previously offering. 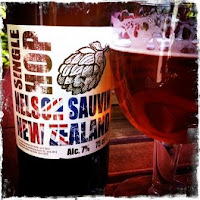 Delhaize Limited Edition Single Hop Nelson Sauvin New Zealand is the third of the trio. Again, orange colour reminds you that the only thing different in these three beers is the hop variety used. The taste of this one is at a new level, however. Fiona finds passionfruit right away and compares it instantly to the outrageously excellent Brew Dog Punk IPA. I get that to some extent, but to me the predominant flavour is grassiness -- not just a handful of clippings but the cut grass slime that builds up on the inside of a lawn-mower. A lawn-mower that ran over a sap-sticky pine branch as well. Wow. Powerful flavour. Almost too much. Fiona is in hop heaven. I’m trying to keep up with her, my mouth nearing bitterness overload...

Tasting the three has been something of an experiment, and it has given me some appreciation of different hop varieties and levels of bitterness. Kent Goldings seemed floral and fruity, Cascade was citrusy, and Nelson Sauvin pushed grassy/passionfruit. In terms of European Bitterness Units (EBU), something I am only starting to understand, the three are 30, 23 and 55 respectively, but that makes sense if I look at my notes. Assuming everything else in the brewing process was the same and acting as a kind of control (and all three are 7% alcohol), the three beers together offer a unique way to understand the role of one of key brewing ingredient. Wonderful.

It’s a shame that these are all limited edition, and that only 4000 bottles were produced. I hope they make more, as I would like to add these to our “regulars” list. About the only fault I can find with them is that Delhaize doesn’t say who the actual brewer is. That would be interesting to know.

Still, if you see them in your local Delhaize, buy them quickly, or I will. Well, actually, Fiona will probably find them before either of us do, but you know what I mean.