How many Belgian beers are there? 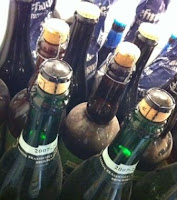 Following the recent buzz of articles and radio interviews highlighting this humble blog, I have received a wave of comments both public and private about the true number of Belgian beers. I have been saying the number is close to 800, but this seems to have caused a bit of controversy.

Now, of course, I realise that the number 800 is an estimate. Beers come and go with the changing success and failure of various labels and breweries. There are seasonal beers that are only made for, say, Easter or Christmas. And then there’s the issue of aging beer. Every attempt to pin down a precise number is trying to hit a moving target at best.

But some readers said I was way off, claiming Belgium had 1000 beers. Others said 1500. Still others said 1800. And one even claimed 2400. Some of them offered lists but none offered tasting notes for each one, which is what this blog is about, of course.

Still, I consulted a few experts on the matter. The late, great Michael Jackson, in his seminal work Great Beers of Belgium, said the country had “around 500” beers, but that was a few years ago, of course. Brussels tour guide and “expert on all things Belgian”, Jan Dorpmans, says 700-800. Wikipedia, which is what I think I used at the beginning of this blog in late 2007, says there are 800 “standard beers”, though they also note, “When special one-off beers are included, the total number of Belgian beer brands is approximately 8,700.”

Ultimately, however, it is not just a question of numbers. This quest is about exploring the quality of Belgian beer and writing about it much more than tallying up a total number. I probably won’t stop at 800 anyway.