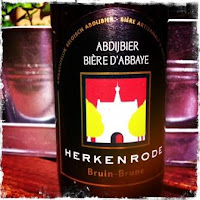 It’s been a heady day for this humble beer blog, with loads of new readers flooding in from today’s article in the Wall Street Journal. But when the fanfare subsides and the instant of fame passes, normal life must go on: there are still many beers to taste and review...

Now, somewhere about a hundred beers ago, I tried a Herkenrode Tripel and expressed my typical amazement at finding yet another great Belgian brew I had never heard of before. Sadly, its sister ale is not going to get the same high praise.

Herkenrode Bruin pours a gorgeous orangey red, and it’s clear, so not bottle-fermented. However, I think that may be part of the problem, as the whole thing just comes across as if most of the tasty bits you expect in a quality Belgian dark beer were filtered off or otherwise removed at some point. It looks great, but it seems to be lacking any flavour complexity at all. The mouthfeel is thin, and while a comforting bitterness makes itself known, there’s not much else to it. Maybe an apple note, but I’m reaching here. In short, it’s just a bit limp.

It’s a shame really, as Herkenrode Tripel was truly excellent.