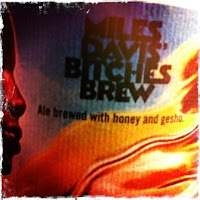 Back in December, I met an old friend at a conference in Switzerland, and she brought me a couple bottles of beer from the US as a gift from both her and her husband, also an old friend. In fact, I think I can take some small credit for them getting together, as they actually met through an online magazine I started about 12 years ago.

The bottle of Fisherman’s Imperial Pumpkin Stout went down in January, and it was delightful, let me tell you. But the second bottle, Bitches Brew from Dogfish Head, sat in my cellar for seven months, waiting for the right moment. Tonight.

It’s another deep, dark treat. Clearly, my friends had been reading my blog before they went shopping and knew that for me, the darker, the better.

Apparently, Bitches Brew is not a very easy beer to find these days, and I can see why. It is astounding, and would disappear from store shelves quickly. It pours ludicrously dark. A laser wouldn’t get though a glass of this stuff.

The initial aroma is a very pleasing whiff of caramelised carrot. The flavour is, as you might guess, espresso and dark chocolate through and through. Malted bitterness reigns here.

The bumf says Bitches Brew is, “a fusion of three threads imperial stout and one thread honey beer with gesho root”, which is a kind of African shrub that is sometimes used in the same way as hops are. (Yes, I had to look it up on Wikipedia...)

Thanks, Andrew and Susan!