A bit of Dutch Bohemia? 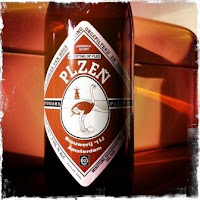 Names are supposed to identify things, but sometimes they just confuse matters by creating false expectations. After many years of living in Bohemia, I easily become befuddled by the staggering ubiquity of “pilsner” beers around the world.

I’ve tasted attempts at pilsner in some pretty unusual places, far from Central Europe, but nothing ever matches the original, Pilsner Urquell. It’s not my favourite beer, nor even my favourite Czech beer. However, it’s a faithful, reliable classic and always a welcome regular.

Now, the Brouwerij ’t IJ in the Netherlands makes some very good beers, but I’ve never tried their “Plzeň” label before, and I’m rather nervous that this one will be an outlier like other wannabe pilsners. It’s somewhat encouraging that they use the Czech name of the southern Bohemian city that gave the brewing world so much, complete with a háček over the n. But brewed in Amsterdam, can “Plzeň” really be a proper pivo plzeňského typu?

My Czech side is ready to wrinkle its nose at the very idea.

The pour goes very well: it’s got a great golden colour, and the head is fantastic, firm yet sinking near the sides of the glass faster than in the middle to leave a little island of puff on the liquid. It couldn’t look any more like a Czech beer if you ordered it in the village pub of Horní Dolní.

The aroma and flavour stray wide of the mark, however. It’s not that it’s a bad beer -- it’s got nice fizz and is high on bitterness -- but, like almost every Brouwerij ’t IJ I have ever had, “Plzeň” has that unusual Savon de Marseille note kicking in.

I really don’t know what it is, but no matter the style of beer, my nose and tongue can spot a ’t IJ product immediately from that one distinctive aspect alone. I wonder if it comes from the water they use in Amsterdam, or if it’s the hop variety, or what. I’d love to figure it out someday.

Overall, then, “Plzeň” is a good beer with a bad name. No pub in Bohemia would be able to sell this, and with that name on it, you’d surely get run out of Plzeň for even trying. Still, location being everything, if you see this in Amsterdam, you should give it a try.