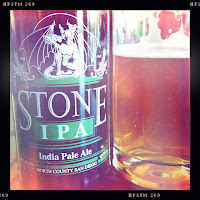 Even just a short beer-tasting trip to the US will tell you that the country has gone mad for super-hoppy India pale ales. You can’t swing an empty growler without hitting a hop-bomb IPA these days.

While I have a hobbyist’s interest in noting how this popular preference evolved, I am more immediately concerned by the fact that my wife has caught the bug and is now on her way to becoming a serious hophead. Seems they just can’t make a beer with a triple-digit IBU number that she doesn’t like...

So, we made a tour of some new-American IPAs while in and around New York, a few of which I can describe here.

Stone IPA is immediately impressive, with strong florals in the aroma and a grapefruit juice bitterness in the flavour. 6.9% alcohol is well-integrated in the overall experience. There’s something of raw snap peas or French green beans about it, too. It says “big character” on label. Indeed. 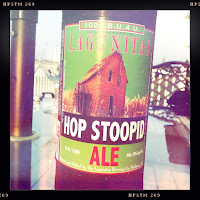 That’s not quite hoppy enough for Fiona, however, so bring on Lagunitas Hop Stoopid. With an aroma of passionfruit, mango and canned peaches, this one is a hopster’s dream at 102 IBU. It pours an orangey copper colour and tastes wicked bitter. 8%. “This is the way it should be”, says Fiona. “It coats your mouth so you taste it for a long time. That makes you not want to snack afterward, so it’s a good diet beer.” 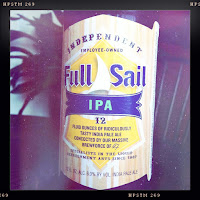 Full Sail IPA is citrusy in flavour, evolving into a gentle maltiness that develops further into lightly bitter. It’s not very fizzy at all. 6% alcohol. Overall, it’s very drinkable, and I find it an excellent balance, rather than a hop attack. It’s lovely after a good day at the Jersey shore with hot sun and rough surf.

Perhaps the best evidence of how IPA-crazy the US has become is that even Costco wholesale stores are pushing it. Its own-brand Kirkland Signature IPA, actually produced by Matt Brewing in Utica, New York, is not half-bad either. Perhaps a bit too thick to be properly refreshing, but it has a hop taste that is serious and piney.

Dogfish Head 60-minute IPA sports an aroma of multi-vitamin juice, according to Fiona: mango and peach in strength. It is very smooth and drinkable, with citrus and pine sap notes, though Fiona finds it a bit too thick. To me the key here is how smooth and velvety it is, even while remaining bitter. 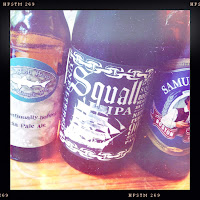 Dogfish Head Squall IPA takes the company’s 90-minute IPA and throws in some bottle-conditioning. Fiona says it has an aroma of salt caramel, while I find it slightly buttery with a hint of vinegar. The taste starts biscuity, with a slightly thick mouthfeel, bitter but not outrageously so. Something about it whispers salt and vinegar crisps. Brian says cola and cinnamon. Fiona points out that it is not citrusy and offers no mango essence like other IPAs, but Luke finds a bit of grapefruit in it.

We enjoyed Peak Organic IPA from a growler in Brooklyn. A lightly floral aroma is inviting, a smooth mouthfeel makes it go down easy, and while it is not insanely hopped for Fiona’s tastes, it is surely hopped enough. Bob says it’s a bit sour for an IPA and finds a lime note. 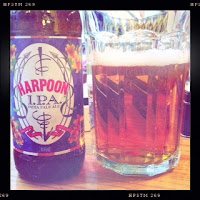 That may seem like quite a few hoppy IPAs, but it is probably only a tenth of one percent of the US brands in this style out there these days. It really is incredible just how much they are currently mesmerising the American market – not to mention the wife.