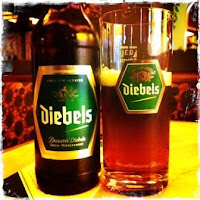 First off were two bottled Alt beers: Hannen Alt and Diebels Alt. Both seemed good to us. Hannen was maybe a bit maltier than the average Alt, and if I had to choose between them, I’d go for the more bitter Diebels. Still, we both thought they weren’t as good as other Alts we’ve had. In particular, I recall that Schlüssel Alt we had a couple months ago... yum... 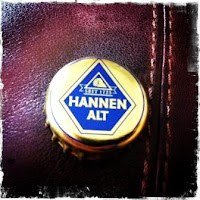 But the next beer threw us a bit. Not for its taste, mind you -- Öcher Lager comes to the table a lovely tan, and the taste is something not a million miles from an Alt beer, if not quite as bitter. Looking around the web a bit, I’ve seen it labelled an Alt. But here’s where the confusion comes in, because I’ve also seen it called a Kölsch-style ale. But the name suggests it’s, um... a lager.

Clearly, something doesn’t add up. Is it top-fermented, like an Alt or a Kölsch, or bottom-fermented like a lager? Trying to find the brewery online doesn’t help. Some websites claim it’s produced by the Lahnsteiner Brauerei in Lahnstein, south of Koblenz, but that doesn’t make any sense if, as other websites suggest, it as a “local beer”. And the Lahnsteiner Brauerei website makes no mention of this beer.

Anyway, if you’re ever in Aachen, step into the Aachener Brauhaus, which used to be a brewery but no longer is, and give it a try.