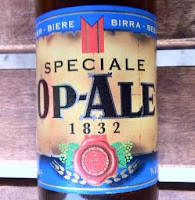 Say you’re on a mission deep behind enemy lines. The black helicopters bring you to the designated rendezvous point on a moonless night, from where you hike over two mountain passes to sneak up on the adversary’s redoubt under the cover of darkness. You overpower the sentries at the gate using only a paperclip and an old gym sock so as to remain undetected.

Then, you nearly reach the inner sanctum of the enemy commander... But something goes wrong: you trip over your untied shoelaces and stumble into a Ming dynasty vase, sending it flying across the room and shattering into a million pieces at the leader’s feet. The alarm is raised, guards appear as if from nowhere, and you find yourself in their custody and facing a grisly death faster than you can say “shark-filled tank”.

When given your last request, what beer would you ask for? What brew could possibly match your extreme lifestyle and quench your extraordinary thirst for adventure?

Only “Special Ops Ale” would do, of course. Nine out of ten Navy SEALs swear by it.

If that’s not available, however, you could try “Spéciale Op-Ale” from Affligem, because, hey, getting a Navy SEAL to swear is probably not that hard anyway.

Spéciale Op-Ale is a bottle-fermented amber that pours gummy bear orange. In taste, it’s got a thin mouthfeel, and it has something of a boiled sweet about it -- cherry cough drops emerge, particularly in the aftertaste. Still, it has a good underlying bitterness that keeps it interesting, if not exactly adventurous.