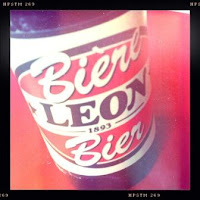 Chez Léon is something of an institution in Brussels. By many accounts, it is this city’s best friture -- a word that might translate as “chippie” if you didn’t understand the Belgian adoration of the deep fried potato. After all, how many chip shops do you know of that have a tri-lingual website and take reservations for dinner?

Elevating its status higher still, Chez Léon also has its own beer.

Produced for the restaurant by St Feuillien brewery, Léon 1893 is a fairly tasty blonde ale, which also comes in live bottles sometimes available at the supermarket, which is how we’re drinking it this evening.

It pours dark golden and has a stiff head. The flavour starts off much as you’d expect for the style, but it includes an odd vegetable note -- steamed celery? They’ve added orange peel apparently, and it is just about noticeable.

I imagine it would go very well with moules-frites. I’ll have to phone and make a reservation at the chippie soon.