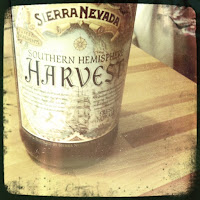 When Bob was over a few weeks ago, it was absurdly hot. So, together with Fiona, we got the barbeque going and shared a few new India Pale Ales. Regular readers of this blog will know that the 40b40 has been going through something of an IPA phase lately, but the weekend did continue, and we did try a few beers of other styles as well.

With the sun high in the sky and the coals roasting my face as I turned the veggie sausages, Bob arrived with a notebook and a bottle of Sierra Nevada Southern Hemisphere Harvest. It’s one of that brewery’s “Special Release” beers, apparently, and it was excellent.

Just how excellent is hard to tell now, writing this some time later, because on this rare occasion Bob was scribbling the tasting notes, and I can barely read a word on the paper. 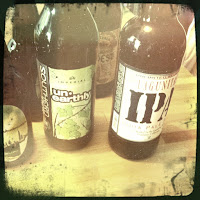 Lagunitas IPA was the next thirst quencher. It had those florals and a thinner mouthfeel, with notes of mango, passion fruit and a hint of sauerkraut. The label was off-putting because of a spelling mistake, but since I can’t read Bob’s notes, I’m not even sure what it was. Maybe we made a spelling mistake too? A decent IPA though.

Unearthly Imperial India Pale Ale was the third IPA of the weekend. It’s produced by the Southern Tier Brewing Company in Lakewood, New York. It came across as sweet and syrupy, not IPA-crisp at all, sadly. Unearthly did have a very interesting spicy note, however. Cloves to be exact. “If I hadn’t expected an IPA, I would enjoy it more”, seemed to sum up our feelings succinctly. 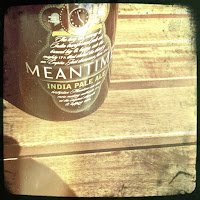 We were both disappointed by the next beer, Meantime IPA, which fell well short of expectations, perhaps because Meantime Stout had so impressed me. Their IPA just seemed thin and wimpy. No oomph. Nothing to make it distinctive. Fiona also caught a bit of “manure aroma”, but then she wondered whether manure could be said to have an “aroma” rather than a “stink”. I think I’ll have to give this beer another try -- surely I got a bad bottle. 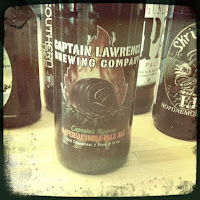 Captain Lawrence Imperial India Pale Ale from Pleasantville, New York, whacked us at first with a powerful smell of alcohol, and the taste was not much improvement. It burned the throat. It was simply out of balance overall. Maybe there were a few nutty notes in there, but that seemed a bit of a reach. 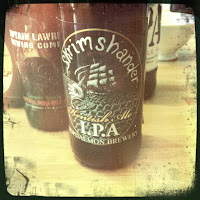 Moving across the pond, the next beer was Skrimshander IPA, from the Hopdaemon Brewery in Kent. Again, sadly, we were unimpressed. It had a hoppy aroma but no great flavour and no citrus. The mouthfeel was watery, and it left an aftertaste that can only be called dusty. For more on our disappointment, listen to the podcast.

One evening turned into a bit of a “goys night in” with He’brew, aka “the chosen beer”, aka “the rejewvenator”... It’s a kosher beer from the Schmaltz Brewery and um, yes, served with plenty of schtick.

This dark beer is made with grape juice, and the aroma is fruity. The taste is sweet and toasty, not highly carbonated. The 8.2% alcohol is a noticeable part of the mix. In Belgian terms, I’d say it’s something between a Palm Royale and a Moinette Brune. Quite nice. L’Chaim, indeed. 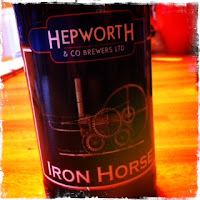 Hepworth Iron Horse, a strong pale ale, hails from the UK. It poured a rich rusty orange-brown, and was quite flat. The taste is mild caramel, with a light bitterness and some gentle hints of peanuts. It wasn’t particularly remarkable or rewarding, I’m afraid.

Finally, the last tasting of the weekend was a German beer: Meister Festbier. This one took us all back to our fabulous summer together in Franconia in 2009, when we stayed just one settlement up the river from the site of Brauerei Meister and sampled Meister Vollbier. 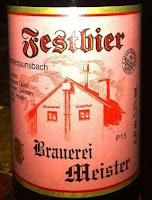 But it was Michael who actually procured this bottle for me just a couple months ago -- thanks, Mike!

The Festbier poured beer-bottle brown, with a spicy aroma. In taste, it had a thin mouthfeel and lightish caramel undertone. It’s a wonderfully smooth and tasty drink. I need to get back to Franconia...

There was one more beer we tried that weekend: Bob's new home brew. But it's not quite ready for writing up yet. We'll leave the second bottle to sit for a month or two.