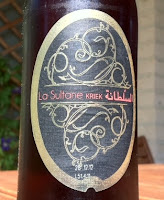 Once again, Fiona has come home from shopping with an amazing find. This time it’s La Sultane Kriek, a halal beer. Following on our tasting of the kosher beer, He’brew, a few weeks ago, it somehow seems only right to give this one a try too.

Belgium’s Caulier Brewery is clearly trying to reach out to a new market here, but whether they are on to something is hard to say. This drink is properly certified halal, and that may draw interest from some practicing Muslims here in Belgium. Perhaps it has export potential as well. This blog on (mostly) Belgian beer receives plenty of hits from predominantly Muslim countries, including some where alcohol is completely illegal, and maybe some of those readers would prefer a non-alcoholic product with a bit more style than the average “near beer” you tend to get in the Near East.

In taste, La Sultane Kriek is like a super sweet cherry soda, much more similar to Belle-Vue Kriek than a traditionally made kriek where tartness predominates, like Cantillon Kriek or, my favourite now, Boon Kriek Mariage Parfait. The absence of alcohol probably does remove some balance from the overall flavour, but it’s hard to discern much of anything beyond sugar.