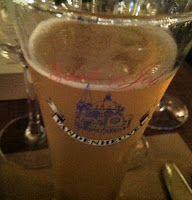 We had a unexpectedly short tasting last night, having to leave L’Imprimerie restaurant and microbrewery about ten minutes after sitting down due to a bit of an emergency: our daughter sprained her ankle at the school disco. But before we got the urgent call, we managed to at least sample L’Imprimerie’s Ekla Pils.

I’m not sure I understand exactly how the current location and brand ownership are related to the former Vandenheuvel Brewery, which used to produce Ekla. However, there must be some sort of arrangement, because the restaurant plays on the connection strongly, with old “Vandenheuvel” and “Vandenheuvel Ekla” signs on display everywhere.

L’Imprimerie, just off Place St Job in Uccle, is a somewhat strange place, being a restaurant in the evening, a nightclub in the early hours and a microbrewery throughout. It doesn’t look like they emphasise the brewing aspect too much. Rather it seems to be just one very small part of their overall business. I’m not sure they take it that seriously either: while they have three beers on the menu and offer a “tasting platter” of four, in fact, the only one they were actually pouring was the pils.

Also, I’m not sure how well informed the staff is about beer. Fiona and I watched in horror as the bartender used a straw to stir up a bit of head on some beers she had poured earlier -- to make them appear fresh, one supposes. Ew...

Still, the beer itself didn’t taste so bad. Ekla Pils is a bit cloudier in looks and thicker in mouthfeel than you might expect. It’s got some sort of herby note to it as well. Not bad.

But sadly, we didn’t have much time to really ponder its virtues extensively. We had to move to the call of the disco.