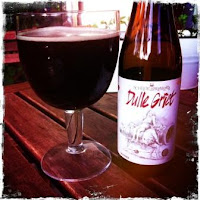 Scheldebrouwerij, some readers may recall, was the Belgian beer find of 2010, as far as I’m concerned. I’ve had five or six of the beers from this small producer north of Antwerp, and every single one has been outstanding. The names of their excellent brews -- such as Hopruiter, Oesterstout and Wildebok -- are now etched in my mind as labels to look out for when on a bottle hunt.

Tonight’s beer, Dulle Griet, is no exception to the rule and looks set to join them on the mental shopping list.

Dulle Griet pours a murky brown, and its flavour is dominated by dark caramels. It’s not at all sweet, however. Delightful black cherry notes peek in oh so briefly through the chocolaty, earthy mist. Overall, it’s somewhat similar to last night’s Hof ten Dormaal Donker, but Dulle Griet is a bit creamier in mouthfeel. Excellent stuff.

It confirms everything I know about Scheldebrouwerij: if you see any of their products anywhere, buy them. You won’t be disappointed.