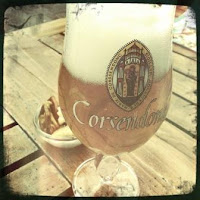 After a spell of shopping this afternoon, we stopped off at L’Ultime Atome, one of my ten favourite places for beer in Brussels, and settled in for a glass. Saturdays around there are pretty noisy, with loads of frantic and frustrated shoppers and honking cars, not to mention the bells of St Boniface going off. Sitting outside is not the most relaxing, but at least there’s lots of free entertainment.

I ordered a Corsendonk Agnus Tripel so I could finally end a long-running controversy. Back in the days leading up to the original 40b40 challenge, the whole enterprise nearly failed to get off the ground because of what became known as “the Corsendonk Crisis”.

It started with a simple argument, but it set off a wave of conflicts that spread bitterness among all parties concerned. Though a way forward was found in the weeks of negotiations that followed, the resulting agreement meant that during the official 40 days, we only had Corsendonk Pater Dubbel and no other Corsendonk offering.

Now, three and a half years later, I think the scars have healed to a significant extent, and in the interests of true reconciliation, it’s finally time to write up Corsendonk Agnus Tripel.

After so much time and trouble, the tasting notes are perhaps surprisingly simple. Agnus pours radiantly fizzy, and the taste is crisp with a refreshing bitterness. There’s no need to argue after all: it is uncontroversially, an excellent Belgian tripel.