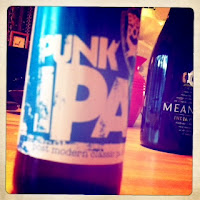 "Passion fruit and pink grapefruit yogurt", says Fiona, and indeed, both flavours are unmistakable from the very first whiff of BrewDog Punk IPA. Its taste follows suit, and maybe adds a bit of candy cane.

The mouthfeel is a bit airy, with fizz powering into puff at first sip. That passion fruit aftertaste isn't going to go away in a hurry.

This Scottish beer's label warns, "This is an assertive beer. We don't care if you don't like it". Same about the branding, I see. But in any case, I do like it. Whether they care or not.

The label on the second beer is immediately more welcoming: "We're sure you'll love this product." And they even offer a refund if I don't. I'm wrinkling my nose a bit as I read on... 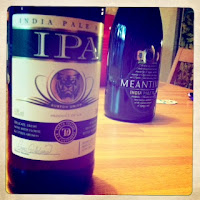 "Don't be snob", Fiona says, handing me the bottle of Sainsbury's IPA, "it's made in Burton."

It's not bad. A fair bit of hop on top of a slightly too obvious layer of caramel malt, but then some very interesting little notes of cinnamon and cola nut kick in.

I'm not sure how well it fits the style, but it's a drinkable enough beer. I won't be calling the toll-free number on the label to complain, let's put it that way.

So, I'm stuck between a beer that I adore but that hates me, and a beer that pleads for my love that I can take or leave. Tricky...