Five more beers not to try 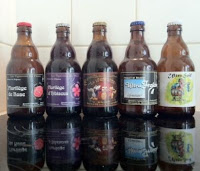 I’m not really sure what it is about the Ecaussinnes Brewery, but they can’t seem to make a beer I like. In fact, I’ve yet to try a beer from them that I even wanted to finish.

It all started badly with the now infamous Cookie Beer Debacle of November 2010, but my tasting of their Ultra délice, Ultra blonde and Ultra ambrée was not much better.

And today, I tasted the final five bottles from Ecaussinnes, which have been sitting in my to-do case for too long simply due to my dread of even opening them. And believe me when I say “tasted” -- I didn’t have more than a mouthful of any of these. This was purely a scientific effort to make the notes and clear a bit of space in the waiting collection. Truly nothing enjoyable.

I began with Ultra Soif, which has a horrible cartoon label, so starts off with marks against it before I even open the bottle. On the pour, the colour is a nice enough pale straw, and it has fine bubbles and a puffy head. The taste isn’t that bad, to be honest: herby like rosemary, evolving to bitter hop. Sadly, the mouthfeel is too syrupy for me. Still, it was the best of the five sampled.

Second was Florilège de Rose, which comes out of the bottle a bit darker, like clear apple juice. Not much head. The taste is shockingly bad: sickly sweet rose water -- not the pleasant rose water flavour you get from Middle Eastern sweets, but rather the overwhelmingly vomit-inducing attack on the senses you get from a hanging tablet of toilet bowl cleaner. Spit it out immediately. Easily one of the foulest beers I’ve ever had.

Third was Florilège d’Hibiscus. It pours a very attractive kriek-ish red -- so far, so good. It is more drinkable than the last one, though admittedly that isn’t saying much. It’s sweet and sour mixed, and actually not a million miles away from a kriek, with a sour aftertaste coming in to save it, just, at the end.

La Loubécoise, the fourth beer in today’s tasting, is made with maple syrup from Quebec. Another gimmick, like Cookie Beer. And also like Cookie Beer, it exploded all over my kitchen when I opened it. At least its maple aroma is better in the food preparation area than Cookie Beer’s urine smell... I’m struggling to say something nice, obviously... The colour is a lovely chestnut. Still struggling... The taste is sweet and gross: maple syrup, sure, but it doesn’t work in a beer, sorry.

Finally, the misery ended with Ultra Fraîche, which pours pretty enough: a healthy golden colour. But the taste is absurdly thin. At first I think it’s an alcohol-free beer, and when I look at the label, I see it almost is: 3.5%. That just means something lost in the body and mouthfeel, I’m afraid. And as if that wasn’t enough, it also has an unpleasant fishy aroma.

Well, that’s it: five sips and the rest down the sink. I’ve done my duty in tasting all these beers from the Ecaussinnes Brewery. If I never see another one from there, that will be just fine by me.